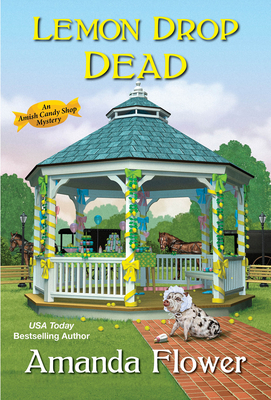 This is book number 6 in the An Amish Candy Shop Mystery series.

Although baby showers aren't an Amish tradition, Bailey King wants to celebrate Emily Keim's forthcoming bundle of joy. It's the least she can do for her hardworking assistant at Swissmen Sweets, especially with Emily being estranged from her siblings. Everyone in Harvest, Ohio has gathered at the town gazebo--decked out in lemon-themed décor to add some of Emily's favorite flavor to the festivities--including Juliet Brook, Jethro the Pig, and in a last-minute invite, Emily's sister Esther Esh.

But Esther isn't the only surprise guest. A mysterious Amish woman confronts Emily claiming to know about her secret shame--the child she had as a teenager who was given up for adoption. The stranger vanishes before Bailey could find out who she was and if she knew what happened to Emily's first baby. Later that evening, the woman reappears--dead in Esh Family Pretzels, with a threatening letter written by Esther found on her body.

Emily knows her sister is not a murderer and convinces Bailey to help clear Esther's name and put the squeeze on the real killer...

Amanda Flower is the USA Today bestselling and Agatha Award-winning mystery author of over twenty-five novels, including the nationally bestselling Amish Candy Shop Mystery Series, the Amish Matchmaker Mysteries, and several series written under the name Isabella Alan. An organic farmer and former librarian, Amanda lives in Northeast Ohio and can be found online at AmandaFlower.com.