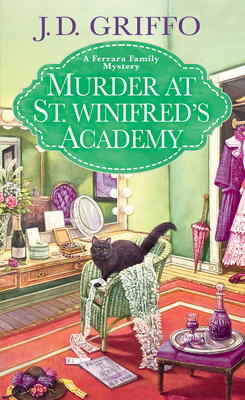 This is book number 5 in the A Ferrara Family Mystery series.

Tranquility, New Jersey's amateur drama troupe is staging a murder mystery at St. Winifred's Academy and Alberta Scaglione couldn't be more thrilled. Even her Italian-American famiglia are getting in on the act. But someone's making deadly revisions to the script...

Alberta can hardly believe it. Her childhood screen idol, 1950s Hollywood starlet Missy Michaels, has signed up for the local Tranquility Players revival of the classic Arsenic and Old Lace. But before Missy memorizes a single line, she's found dead in her dressing room wrapped in lace and clutching a bottle of arsenic. The ultimate drama-queen suicide? Everyone thinks so--except Alberta. A Ferrara woman knows murder when she sees it. Alberta also knows producer Nola Kirkpatrick's checkered past: whenever she's around, trouble abounds.

Alberta and her crime-reporting partner-in-sleuthing granddaughter, Jinx, have a hunch the murderer is among the Players. So Alberta joins the cast--reluctantly playing Missy's role--to get closer to the truth. She notices the director is a little unbalanced, but aren't they all? The leading man is a wildly obsessive Missy Michaels fanboy--but a murderer? Of course, the show must go on. But if Alberta and Jinx can't nab the killer before opening night, it may mean curtains for more Players...including Alberta.

J.D. Griffo is the award-winning author of the Ferrara Family Mysteries, several screenplays, and a number of YA novels written under the name Michael Griffo. A graduate of New York University, he has studied at Playwrights Horizons and Gotham Writers Workshop. Like his series protagonist, Jinx Ferrara, he's from a large Italian-American family and grew up in New Jersey, where he currently resides. He can be found online at MichaelGriffo.com, on Instagram @j.d.griffo or on Twitter @Michael2264.