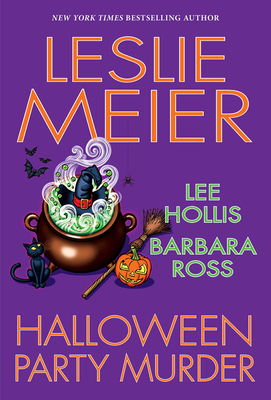 Small town traditions are celebrated throughout Maine during the holiday season. But when it comes to Halloween, some people are more than willing to reap a harvest of murder . . .

Tinker’s Cove newest residents Ty and Heather Moon turn their Victorian home into a haunted house to raise funds for charity. But when Heather overdoses on tainted drugs and Ty finds himself accused of murder, journalist Lucy Stone uncovers some sinister secrets in the Moons’ past linked to a conspiracy in her hometown . . .

DEATH OF A HALLOWEEN PARTY MONSTER by LEE HOLLIS

Everyone attending Island Times Food and Cocktail columnist Hayley Powell’s Halloween bash is dressed as their favorite movie monster. But when partygoers stumble upon Boris Candy’s bludgeoned costumed corpse, it falls to Hayley to discover who among her guests wanted to stop the man from clowning around permanently . . .

SCARED OFF by BARBARA ROSS

Three teenage girls having a sleepover on Halloween night get spooked when high schoolers crash the house for a party. But no one expected to find a crasher like Mrs. Zelisko, the elderly third floor tenant, dead in the backyard—dressed in a sheet like a ghost. With her niece traumatized, Julia Snowden must unmask the killer behind such a murderous trick . . .

LESLIE MEIER is the acclaimed author of over twenty-five Lucy Stone Mysteries. She has also written for Ellery Queen’s Mystery Magazine, and like her series protagonist, Lucy Stone, she worked as a New England newspaper reporter while raising  her three children. She is currently at work on the next Lucy Stone mystery and can be found online at LeslieMeierBooks.com.

LEE HOLLIS, the pen name for Rick Copp, is the author of the Desert Flowers Mysteries and the Maya and Sandra Mystery  Series. He is also the co-author of the Hayley Powell Food & Cocktail Mysteries with his sister, Holly Simason. A veteran  Hollywood screenwriter, he is the co-writer of The Brady Bunch Movie and has written for numerous television series, including  The Golden Girls, Wings,Scooby-Doo, Teen Titans, and Barbershop. He also produces, writes, and stars in the hit web series  Where the Bears Are. He lives in Palm Springs, California and can be found online at LeeHollisMysteries.com.


BARBARA ROSS is the author of the Maine Clambake Mysteries and the Jane Darrowfield Mysteries. Her books have been nominated for multiple Agatha Awards for Best Contemporary Novel and have won the Maine Literary Award for Crime Fiction. Barbara’s Maine Clambake novellas are included along with stories by Leslie Meier and Lee Hollis in holiday anthologies from Kensington Publishing. Barbara and her husband live in Portland, Maine. Readers can visit her website at www.BarbaraRossAuthor.com.