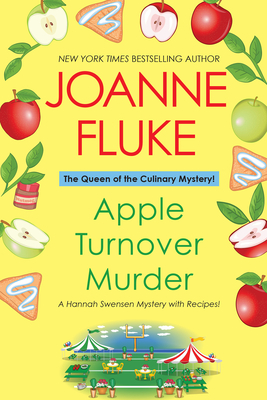 This is book number 13 in the A Hannah Swensen Mystery series.

Now in a beautifully repackaged trade paperback and including ten scrumptious recipes for readers to try at home, the 13th installment of Joanne Fluke’s New York Times bestselling Hannah Swensen Mystery series finds the Lake Eden, Minnesota bakery owner tracking down a killer who is flakier than a puff pastry!

It's June in Lake Eden, Minnesota, and for Hannah Swensen, that means bridal showers galore, plus a massive fundraising event in need of confections—not to mention a killer who never learned that charity begins at home . . .

Early summer brings plenty of work for Hannah, even before Mayor Bascomb's wife drops by The Cookie Jar to place an order for eleven-hundred cookies. Stephanie Bascomb is organizing an elaborate three-day event to support local charities, and though it's a worthy cause, Hannah almost flips when her business partner, Lisa, suggests setting up an apple turnover stand. Hannah's never made a turnover—but pushover that she is, she places her faith in Lisa's mother-in-law's recipe and agrees to be a magician's assistant in the fundraiser's talent show . . .

Hannah has to admit that stepping out of her comfort zone has been fun as well as profitable. The only snag is the show's host, community college professor Bradford Ramsey. Hannah and her younger sister Michelle each had unfortunate romantic relationships with Ramsey, and when he comes sniffing around between acts, Hannah tells him off. But when the curtain doesn't go up, she discovers Ramsey backstage—dead as a doornail with a turnover in his hand. To protect her reputation and Michelle's, Hannah must get to the bottom of the professor's bitter end—and track down a killer who's flakier than puff pastry—and far more dangerous . . .

JOANNE FLUKE is the New York Times bestselling author of the Hannah Swensen mysteries, which include Triple Chocolate Cheesecake Murder, Coconut Layer Cake Murder, Chocolate Cream Pie Murder, and the book that started it all, Chocolate Chip Cookie Murder. That first installment premiered as “Murder, She Baked:  A Chocolate Chip Cookie Mystery” on the Hallmark Movies & Mysteries Channel, and has since been followed by five more TV movie adaptations based on the series and starring Alison Sweeney. Like Hannah Swensen, Joanne Fluke was born and raised in a small town in rural Minnesota, but now lives in Southern California. Visit Joanne online at JoanneFluke.com.