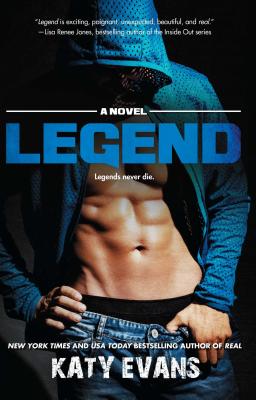 This is book number 6 in the The REAL series series.

Maverick “The Avenger” Cage wants to rise to the top and become a legend in the ring. Though he keeps his identity well guarded, he’s known on the fighting circuit as the new kid with a chip on his shoulder and a tattoo on his back that marks him as trouble. He’s got a personal score to settle with the Underground’s one and only Remington “Riptide” Tate.

As Mav trains, he meets a young girl—the only other new person in the town—and sparks fly. When things get heated between them, he finds out she’s none other than Reese Dumas, the cousin of Remington Tate’s wife. A girl who’s supposed to root against him and a girl he’s supposed to stay away from.

But Mav fights for the woman in his heart and the monsters in his blood. The world’s eyes are on them, and the victor will go down in history as the ultimate fighting champion—the ultimate LEGEND.

Katy Evans lives with her husband and their two children plus three lazy dogs in south Texas. Some of her favorite pastimes are hiking, reading, baking, and spending time with her friends and family. She is the New York Times and USA TODAY bestselling author of Manwhore, Manwhore +1, Ms. Manwhore, and The REAL series: REAL, MINE, REMY, ROGUE, RIPPED, and LEGEND. For more information on Katy Evans visit her website KatyEvans.net, and follow her on Facebook and Twitter, @AuthorKatyEvans.

"A strong, intense, sexy young fighter with a chip on his shoulder lies at the center of Evans' latest. Smart, modern storytelling coupled with an engaging plot are the highlights. Reese and Maverick's compelling voices will draw readers in, along with their electrifying chemistry. Fans of Evans' REAL series will not be disappointed."
— RT top pick