Hunt Her Down (The Bullet Catchers #7) (Paperback) 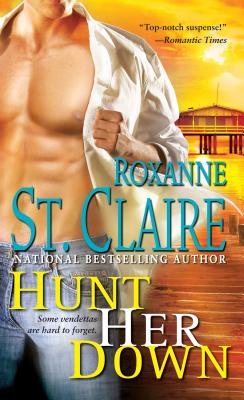 This is book number 7 in the The Bullet Catchers series.


This seventh book in Roxanne St. Claire’s sexy Bullet Catchers series features Dan Gallagher, a former FBI agent turned bodyguard who takes a sabbatical to track down his long-lost love—only to discover the son he never knew he had.

Fourteen years ago, former FBI agent Dan Gallagher put drug lord Ramón Jimenez behind bars—after he fell for Ramón’s girlfriend, Maggie. So, when Dan learns that Ramón has been released from prison, he worries that Ramón will hunt Maggie down, seeking revenge. Taking a sabbatical from work, Dan quickly tracks her down and finds more than he bargained for: Maggie has a teenage son, Quinn, who’s the spitting image of Dan. Then Quinn is kidnapped, and Dan and Maggie must work together to find their son before it’s too late.

Roxanne St. Claire is the author of the Bullet Catchers series and the critically acclaimed romantic suspense novels Killer Curves, French Twist, and Tropical Getaway. The national bestselling author of more than seventeen novels, Roxanne has won the Romance Writers of America's RITA Award, the Bookseller's Best Award, the Book Buyers "Top Pick," the HOLT Medallion, and the Daphne Du Maurier Award for Best Romantic Suspense. Find out more at RoxanneStClaire.com, at Twitter.com/RoxanneStClaire, and at Facebook.com/RoxanneStClaire.