No One Knows (Paperback) 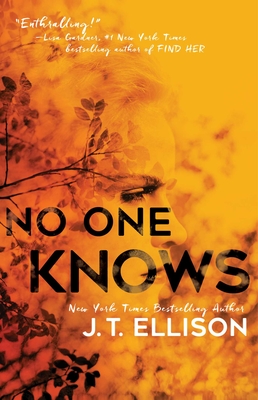 With the same page-turning suspense as The Girl on the Train and The Husband’s Secret, New York Times bestselling author J.T. Ellison’s No One Knows is a “riveting…skillfully plotted” (Publishers Weekly) thriller that questions if the narrator’s husband really has returned from the dead—or if she’s merely losing her mind.

Aubrey Hamilton has been mourning her missing husband for five years, despite being even while she was considered the prime suspect in his murder. But when he is officially declared dead, there are still more questions than answers: Why didn’t Josh show up at his friend’s bachelor party? Was he murdered, or did he run away? And who is the new, mysterious and strangely familiar figureman suddenly appearing in Aubrey’s life? And has she finally lost her mind after years of loneliness and confusion?

No One Knows is an evocative mystery that explores the complex darkness within all of us, perfect for fans of Gillian Flynn, Liane Moriarty, and Paula Hawkins.

“Clever and compelling, JT Ellison’s NO ONE KNOWS is a page-turner full of unexpected turns and surprises. Pour a glass of wine, settle down in your favorite chair, and get ready for an entertaining roller coaster of a read. JT Ellison is a fast-rising star.”
— Jeff Abbott, New York Times bestselling author of THE FIRST ORDER

"J.T. Ellison's stand-alone thriller is a slow burn suspense that heats up, page-by-page, until the shocking end. NO ONE KNOWS is unputdownable, a gripping story that begs to be read in one sitting."
— Allison Brennan, New York Times bestselling author of NO GOOD DEED

“NO ONE KNOWS hooked me from page one. The more I read, the more I had to know what really happened to Aubrey’s husband that night in Nashville. And the more I trusted Aubrey’s version of events, the more I doubted them as well. Ellison has written a masterful game of cat-and-mouse.”
— Erica Spindler, New York Times bestselling author of THE FIRST WIFE and THE FINAL SEVEN

“No One Knows grabs you from the start and doesn’t let go. A compelling thriller about loss, betrayal, and buried secrets, it’s a book you’ll devour, trying to guess what’s going on and what will happen next. The twists are genuinely—and satisfyingly—shocking. J.T. Ellison has written another winner.”
— —Meg Gardiner, Edgar Award-winning author of Phantom Instinct

“J.T. Ellison has created one hell of a brain-bender. NO ONE KNOWS is a masterfully written shell game in which a grief-stricken woman is forced to reckon with her past until everything she believes about love, hope, and trust is tested. Ellison’s storytelling powers are on sharp display in this literary thriller, proving that no one is who they claim to be and everyone has secrets worth protecting. Compelling, perceptive, unsettling and with an ending so on point I wish I could read it again for the first time. I inhaled this novel.”
— -- Ariel Lawhon, author of FLIGHT OF DREAMS

"Like a nerve-shredding trip through a carnival house of mirrors, NO ONE KNOWS left me breathless. Ellison's deft, seamless prose makes her devilish twists look effortless, and her sleight-of-hand with the facts of Aubrey Hamilton’s troubled life keeps the tension wire-high.

NO ONE KNOWS is razor-sharp, shocking, and delicious."
— —Laura Benedict, author of Charlotte’s Story

"The unreliable female narrator is all the rage, and Aubrey Hamilton is up there with the slipperiest of them all."
— Kirkus Reviews

"No One Knows will have inevitable comparisons to Gone Girl...Ellison messes with the character’s head as well as the readers with her many twists and turns."
— Crimespree Magazine

"NO ONE KNOWS does not disappoint!...Keeps the reader on the edge of their seat."
— SOKY Book Fest Reads, Southern Kentucky Book Festival

"A dark domestic thriller that is sure to leave you guessing until the final page."
— SheReads.org