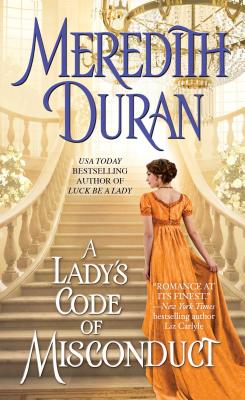 By Meredith Duran
$9.99
Backordered or Out of Print

A deal with the devil...

Trapped in the countryside, facing an unwanted marriage and the theft of her fortune, Jane Mason is done behaving nicely. To win her freedom, she’ll strike a deal with the most dangerous man she ​knows—a rising star in politics, whose dark good looks mask an even darker heart.

The bitter past has taught ​Crispin Burke to trust no one. He’ll gladly help a lovely young heiress, provided she pays a price. Yet when a single mistake shatters his life, it is Jane who holds the key to his salvation. And in a world that no longer makes sense, Crispin slowly realizes that she may be the only thing worth fighting for...

Meredith Duran is the USA TODAY bestselling author of thirteen novels. She blames Anne Boleyn for sparking her lifelong obsession with British history (and for convincing her that princely love is no prize if it doesn’t come with a happily-ever-after). She enjoys collecting old etiquette manuals, guidebooks to nineteenth-century London, and travelogues by intrepid Victorian women.

“The tale and characters so captivated me, that I literally couldn’t put it down."
— –New York Times bestselling author Sabrina Jeffries

“Political intrigue drives a captivating historical romance…This Regency romance, part of the Rules for the Reckless series, is a smart love story, peopled with complex and absorbing characters.”
— —BookPage, TOP PICK IN ROMANCE

"A Lady’s Code of Misconduct is chock-full of emotional depth, passion and compassion. Duran delivers a wonderfully crafted romance with an intriguing historical backdrop, and characters readers will hold in their hearts."
— RT Book Reviews

"Duran is at the pinnacle of her craft as she weaves together humor, forgiveness, and love in a flawlessly executed plot. … The characters are all well drawn, and the love scenes strike the perfect balance of steamy and sweet. Each layer in the story is suspenseful and delightful, making this the best installment so far."
— Publishers Weekly, starred review

"A sham marriage, political intrigue, and a case of amnesia provide a backdrop for this absorbing Victorian romance. … Although Duran has written a novel as layered as an onion, the characters are well-drawn and the plot flawlessly executed. Add in some very steamy sex, and the fifth installment of Duran’s Rules for the Reckless series can’t help but delight. This book weaves its spell so thoroughly that the most fortunate reader will be the one who has time to read the entire thing in one sitting. A masterful tale of suspense, forgiveness, and love."
— Kirkus Reviews, starred review