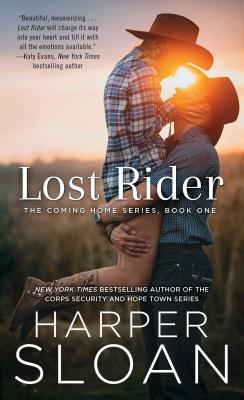 By Harper Sloan
$9.99
Backordered or Out of Print

This is book number 1 in the The Coming Home Series series.

In Lost Rider, the first Western romance in New York Times and USA TODAY bestselling author Harper Sloan’s Coming Home series, an injured rodeo star encounters an old flame but will she be just what he needs to get back in the saddle?

Maverick Austin Davis is forced to return home after a ten-year career as a rodeo star. After one too many head injuries, he’s off the circuit and in the horse farming business, something he’s never taken much of a shine to, but now that it’s his late father’s legacy, familial duty calls. How will Maverick find his way after the only dream he ever had for himself is over?

Enter Leighton Elizabeth James, an ugly duckling turned beauty from Maverick’s childhood—his younger sister’s best friend, to be exact, and someone whose heart he stomped all over when she confessed her crush to him ten years back. Now Leighton is back in Maverick’s life, no longer the insecure, love-stricken teen—and Maverick can’t help but take notice. Sparks fly between them, but will Leighton be able to open her heart to the one man who broke it all those years ago?

Written in the vein of Diana Palmer and Lindsay McKenna, this Texas-set series is filled with sizzle, heart, and plenty of cowboys!

Harper Sloan is the New York Times and USA TODAY bestselling author of the Corps Security and Hope Town series. She started writing as a way to unwind when the house went to sleep at night. Harper lives in Georgia with her family. Visit her at AuthorHarperSloan.com or Facebook.com/HarperSloanBooks.

"Sloan hits it out of the park with her first Coming Home contemporary western romance[.] Maverick is a perfect hero: multilayered, complicated, deeply damaged, yet blooming with the new promise of love. Leighton is appealing and real, as are a strong supporting cast of characters whom readers will be glad to follow into sequels. Sloan enhances the gripping story with country songs that open each chapter. This absolutely spectacular effort catapults Sloan to the top of her genre."

“The first book in Sloan’s Coming Home series is a super-sexy second-chance read with a handsome ex-rodeo cowboy hero and the girl he left behind. The characters are well-written and the bedroom scenes are hot…Sloan does a wonderful job with portraying the secondary characters, and it looks like Quinn’s story, which is next up, is going to be a good one.”