Echoes in the Walls (House of Secrets #2) (Mass Market) 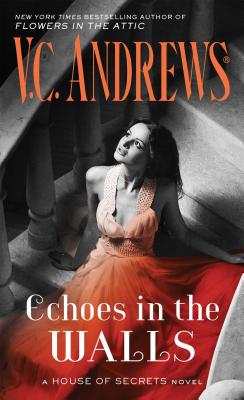 This is book number 2 in the House of Secrets series.

New York Times bestselling author and literary phenomenon V.C. Andrews (Flowers in the Attic, My Sweet Audrina) presents the second book in the gothic saga of romance, class divisions, and the family secrets that began with House of Secrets.

The grand, gothic Wyndemere House is a labyrinth, containing as many secrets as it does corners obscured in shadow. Home to the Davenports, a wealthy and distinguished family, Fern Corey and her mother have lived there as servants for Fern’s entire young life. Despite their difference in station, Fern and Dr. Davenport’s son, Ryder, have always been extremely close. Which was never a problem…until they came of age.

An intimate encounter following a high school prom brings the pair near-tragic consequences, and the forces of fate, arrogance, and class prejudice gather to crush their warm relationship. Still, the real threat to their happiness is something no one can control: the past, and the unspoken truths that lurk there.

Fern and Ryder’s parents suffer with empathy, they themselves caught in the emotional maze the house creates. When the slow revelations of Wyndemere's secrets finally unfold, everyone party to them will become entangled in a treachery more complete than any could have imagined.

For the past is never really past, no matter what age you are.

One of the most popular authors of all time, V.C. Andrews has been a bestselling phenomenon since the publication of Flowers in the Attic, first in the renowned Dollanganger family series, which includes Petals on the Wind, If There Be Thorns, Seeds of Yesterday, and Garden of Shadows. The family saga continues with Christopher’s Diary: Secrets of Foxworth, Christopher’s Diary: Echoes of Dollanganger, and Secret Brother, as well as Beneath the Attic, Out of the Attic, and Shadows of Foxworth as part of the fortieth anniversary celebration. There are more than ninety V.C. Andrews novels, which have sold over 107 million copies worldwide and have been translated into more than twenty-five foreign languages. Andrews’s life story is told in The Woman Beyond the Attic. Join the conversation about the world of V.C. Andrews at Facebook.com/OfficialVCAndrews.