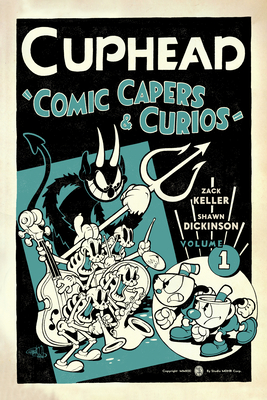 Revisit the colorful characters of the Inkwell Isles in this collection of brand new Cuphead and Mugman tales!

Prone to unexpected predicaments and thrilling adventures, Cuphead and Mugman feature front and center in a series of short but sweet side stories that reimagine the world of the all-cartoon magical wondergame. This original graphic novel features all-new original tales, authentically drawn to match the glorious, award-winning vintage animation style of Cuphead!

Zack Keller is a writer and director for TV, feature films, videogames and comic books, currently working as a Narrative Director at King on an unannounced project. He studied at USC's School of Cinematic Arts before beginning his career at Pixar Animation Studios. Afterwards, he co-created Dick Figures, the highest-rated animated web series on YouTube which earned nearly a billion views and an Annie Award nomination. At Telltale Games, he was a writer and narrative designer for such franchises as Guardians of the Galaxy, Batman, The Walking Dead and Tales from the Borderlands. Most recently, he wrote for Cartoon Network's animated series Unikitty! and created the original horror comic, Death Head, for Dark Horse Comics.

He lives in San Francisco with his wife and two destructive rabbits.