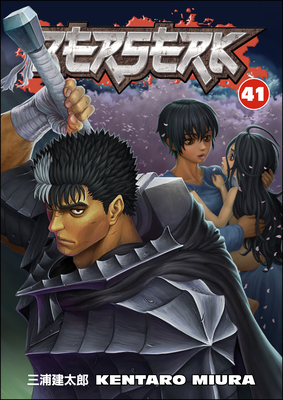 The world of manga was devastated by the May 2021 death of Berserk creator Kentaro Miura, but Miura-sensei left behind one final volume to cap his thirty-plus-year commitment to his signature vision.

While Miura’s epic remains unfinished, Berserk Volume 41 is a fitting curtain call for the beloved series, filled with joy, sadness, laughter, and imagination.

Though Casca has at last been released from the prison of her own mind, she cannot escape the reminders of the terrors she has experienced. And nothing triggers the return of these harrowing memories than Guts the Black Swordsman, who faced those same horrors in his relentless quest to bring Casca to a place where she might be healed. But the reappearance of a strange, mute boy could well be the key to bringing peace to Casca’s troubled soul.

While attending college at Nihon University, in 1988, Kentaro Miura debuted a 48-page manga known as Berserk Prototype, an introduction to the current Berserk fantasy world. It went on to win Miura a prize from the Comi Manga School. In 1989, after receiving a doctorate degree, Kentarou started a project titled King of Wolves based on a script by Buronson, writer of Hokuto no Ken (Fist Of The North Star).

In 1990, the first volume Berserk was released with a relatively limited success. Miura again collaborated with Buronson on manga entitled Japan. Miura's fame grew after Berserk began "The Golden Age" story arc and the huge success of this masterpiece made of him one of the most prominent contemporary manga artists.

In 1997, Miura supervised the production of 25 anime episodes of Berserk that aired in the same year on NTV.

The series has also spawned a whole host of merchandise, both official and fan made, ranging from statues and action figures, to key rings, video games, and a trading card game. In 2002, Kentaro Miura received the second place in the Tezuka Osamu (Astro Boy) Cultural Prize of Excellence for Berserk.