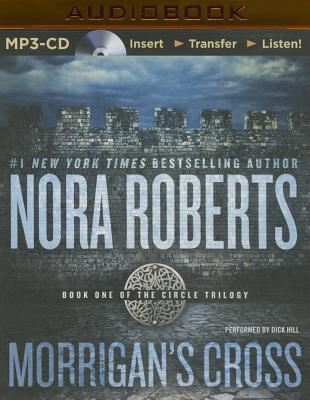 By Nora Roberts, Dick Hill (Read by)
$12.99
Backordered or Out of Print

Standing on the cliffs of 12th century Ireland following the disappearance of his twin, Hoyt Mac Cionaoith is visited by the goddess Morrigan and is charged with the ultimate of tasks: saving his and all future worlds. His enemy, the beautiful but deadly vampire queen Lilith, has had over two thousand years experience in cruelly killing and changing humans into one of her own--including Hoyt's brother, Cian.

Now, Hoyt, a sorcerer, must travel across the world and through time to find and train the five others Morrigan has prophesized will join him as a circle and do battle against Lilith's army of vampires on Samhain in the land of Geall. But just who is the witch, the shape-changer, the scholar, the warrior, and the vampire? How will this unlikely band of six prepare and become one with less than three months until the possible end of the world?

Following the arrival of Glenna Ward--a modern day witch with a knack for making her own kind of magic, the kind that makes his heart melt--Hoyt must find the strength to save the world, and a love that knows no bounds.