The Song of Wrath (Bones of Ruin Trilogy #2) (Hardcover) 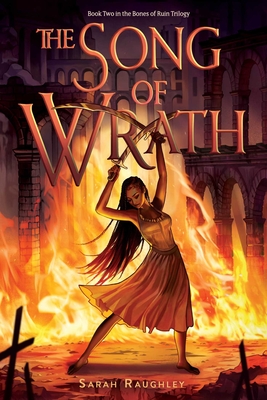 This is book number 2 in the Bones of Ruin Trilogy series.

Penny Dreadful meets The Gilded Wolves in this captivating sequel to young adult historical fantasy The Bones of Ruin that follows immortal Iris as she desperately tries to thwart her destructive destiny.

Iris Marlow can’t die. For years, she was tormented by her missing memories and desperate to learn her real identity. So when the mysterious Adam Temple offered to reveal the truth of who she was in exchange for her joining his team in the Tournament of Freaks, a gruesome magical competition, it was an offer she couldn’t refuse. But the truth would have been better left buried.

Because Adam is a member of the Enlightenment Committee, an elite secret society built upon one fundamental idea: that the apocalypse known as Hiva had destroyed the world before and would do it again, and soon. But what the Committee—and Iris—never guessed is that Hiva is not an event. Hiva is a person—Iris.

Now, no matter how hard Iris fights for a normal life, the newly awakened power inside her keeps drawing her toward the path of global annihilation. Adam, perversely obsessed with Iris, will stop at nothing to force her to unlock her true potential, while a terrifying newcomer with ties to Hiva’s past is on the hunt for Iris.

All Iris wants is the freedom to choose her own future, but the cost might be everything Iris holds dear—including the world itself.

Sarah Raughley grew up in Southern Ontario writing stories about freakish little girls with powers because she secretly wanted to be one. She is a huge fangirl of anything from manga to sci-fi fantasy TV to Japanese role-playing games and other geeky things, all of which have largely inspired her writing. Sarah has been nominated for the Aurora Award for Best YA Novel and works in the community doing writing workshops for youths and adults. On top of being a YA writer, Sarah has a PhD in English, which makes her a doctor, so it turns out she didn’t have to go to medical school after all. As an academic, Sarah has taught undergraduate courses and acted as a postdoctoral fellow. Her research concerns representations of race and gender in popular media culture, youth culture, and postcolonialism. She has written and edited articles in political, cultural, and academic publications. She continues to use her voice for good. You can find her online at SarahRaughley.com.

"Bloodily spectacular. The Bones of Ruin builds page after page of visceral intrigue, steamrolling toward the end of the world in Victorian London. These characters could tear you apart, but you will love them all the same. Sarah Raughley’s world breathes true to the past and yet gleams brilliantly new."

"Sarah Raughley proves once again that, like her intricate worlds and wonderful characters, she is a master of decolonization and a force to be reckoned with."
— E.K. Johnston, New York Times bestselling author on THE BONES OF RUIN

"This cryptic, enticing journey is told in alternating, third-person perspectives: Adam’s cold and calculating, Iris’ searching and daring. The author builds a delicious tension that will have readers putting the pieces together as the end of the world nears and wanting more after they reach the climactic cliffhanger ending. A rousing series opener."
— Kirkus Reviews on THE BONES OF RUIN

"The fantastical premise supports a multilayered plot and vibrant characters. Meanwhile, themes of racial abuse, violence, and rebirth, paired with a wealth of romantic options, add further complexity to this series starter."
— Publishers Weekly on THE BONES OF RUIN