The Truth About Dukes (Rogues to Riches #5) (Mass Market) 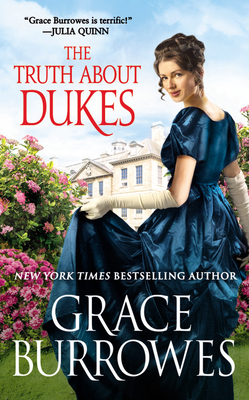 This is book number 5 in the Rogues to Riches series.

A new duke and a woman with a secret in her past get a second chance at love in this delightful and charming Regency romance from the New York Times bestselling author of the Windham series.

Robert Rothmere is hiding a past no duke should have endured, but he's not hiding it well enough. Sooner or later, his enemies will learn that he spent years locked away at a private asylum. To get their hands on his wealth, they'll try to send him right back to his worst nightmares. If Robert is to foil their schemes, he needs to marry a perfectly proper, blessedly boring, deadly dull duchess, immediately -- and he knows exactly which quietly delightful lady he'd love to entrust with that role.

Lady Constance Wentworth has cultivated a reputation for utter forgettability. She never speaks out of turn (in public), never has a daring thought (that she admits aloud), and never comes close to courting scandal . . . as far as anybody knows. Her path crossed Robert's years ago, though, and she's never forgotten the extraordinary lengths he traveled to keep her safe when she hadn't a friend in the world. She longs to be his demure duchess . . . but little does he know that to marry her would be utter madness.

Grace Burrowes grew up in central Pennsylvania and is the sixth of seven children. She discovered romance novels in junior high and has been reading them voraciously ever since. Grace has a bachelor's degree in political science, a bachelor of music in music history (both from the Pennsylvania State University), a master's degree in conflict transformation from Eastern Mennonite University, and a juris doctor from the National Law Center at George Washington University.

Grace is a New York Times and USA Today bestselling author who writes Georgian, Regency, Scottish Victorian, and contemporary romances in both novella and novel lengths. She enjoys giving workshops and speaking at writers' conferences.

"Readers will root for the fierce, resolute Constance and passionate Robert as they bond over their shared pasts and mutual determination to overcome adversity and stigma. Burrowes takes her series to new heights with this tender, turbulent romance."—Publishers Weekly, starred review

"In The Truth About Dukes, Burrowes delightfully twists many of historical romance's traditional beats. A refreshing, remarkably crafted Regency that will garner the multi-award-winning Burrowes legions of new fans."—Library Journal, starred review

“The trials Robert and Constance have faced only highlight their strength and resilience as a family. Their love for each other is fierce and lovely, and their fight to defend it is inspiring. It’s a wonderful ray of hope to read a story like this where tremendous obstacles are overcome through faith, family and a true and deep devotion.”

"A sweet, passionate romance that is sure to enchant."—Library Journal, starred review, on When a Duchess Says I Do

"An unusual pair of smart and worldly but reticent lovers; a modern sensibility about themes of consent, class, and disability; and a surprising and adventurous plot make Burrowes's latest Rogues to Riches Regency satisfyingly relatable nerdy escapism...will warm readers' hearts to the core."—Publishers Weekly, starred review, on When a Duchess Says I Do

"Grace Burrowes writes from the heart--with warmth, humor, and a generous dash of sensuality, her stories are unputdownable! If you're not reading Grace Burrowes you're missing the very best in today's Regency Romance!"—Elizabeth Hoyt, New York Times bestselling author