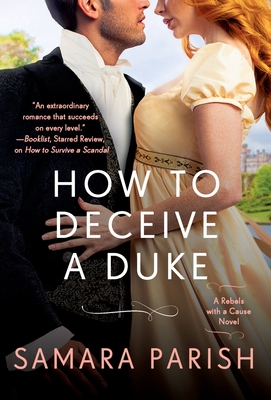 This is book number 2 in the Rebels with a Cause series.

Fiona McTavish is an engineer, a chemist, a rebel—and no one’s idea of a proper lady. She prefers breeches to ballrooms, but her new invention—matches—will surely turn as many heads. There’s just a little matter of her being arrested for a crime she didn’t commit. And the only person she can turn to for help is the man who broke her heart years ago.

Edward Stirling, Duke of Wildeforde, will do anything to restore his family’s name and put his father’s scandalous death behind them. But when Fiona needs his help getting released from prison, he can’t deny her—even though it means she must live with him as a condition of her freedom. With the desire between them rekindling as fast as the gossip about their arrangement is spreading among the ton, Edward will have to choose what matters most to him—his reputation or his heart.

Samara Parish has been escaping into fictional worlds since she was a child. When she picked up her first historical romance book, she found a fantasy universe she never wanted to leave and the inspiration to write her own stories. She lives in Australia with her own hero and their many fur-babies in a house with an obscenely large garden, despite historically being unable to keep a cactus alive. How to Survive a Scandal is her debut novel.

You can follow her writing, gardening, and life adventures on social media or by signing up for her newsletter at samaraparish.com/scandal-newsletter.

"Readers will be eager for more.” —Publishers Weekly, starred review

“Historical romance fans will be happy to find another strong-willed, science-minded heroine and the duke who loves her, and they’ll look forward to the next story in the series.”—Library Journal

"A sparkling new voice in historical romance delivers a satisfying story of love on the edges of the beau monde."—Kirkus Reviews

“With the perfect combination of drama, sensuality, and emotion, this refreshing story is sure to make a splash.”—Publishers Weekly on How to Survive a Scandal, starred review

"In this dazzling debut, Parish gives historical romance readers everything they could ever desire in a novel... [A]n extraordinary romance that succeeds on every level."—Booklist on How to Survive a Scandal, starred review