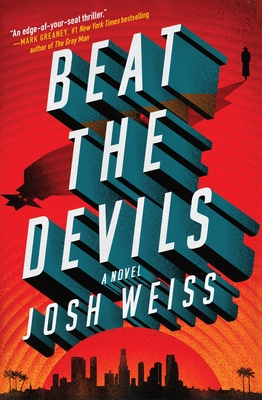 USA, 1958. President Joseph McCarthy sits in the White House, elected on a wave of populist xenophobia and barely‑concealed anti‑Semitism. The country is in the firm grip of McCarthy's Hueys, a secret police force evolved from the House Un-American Activities Committee. Hollywood's sparkling vision of the American dream has been suppressed; its remaining talents forced to turn out endless anti‑communist propaganda.

LAPD detective Morris Baker—a Holocaust survivor who drowns his fractured memories of the unspeakable in schnapps and work—is called to the scene of a horrific double‑homicide. The victims are John Huston, a once‑promising but now forgotten film director, and an up‑and‑coming young journalist named Walter Cronkite. Clutched in the hand of one of the dead men is a cryptic note containing the phrase “beat the devils” followed by a single name: Baker. Did the two men die in an attack fueled by better-dead-than-red sentiment, as the Hueys are quick to conclude, or were they murdered in a cover-up designed to protect—or even set in motion—a secret plot connected to Baker's past?

In a country where terror grows stronger by the day, and paranoia rises unchecked, Baker is determined to find justice for two men who raised their voices in a time when free speech comes at the ultimate cost. In the course of his investigation, Baker stumbles into a conspiracy that reaches deep into the halls of power and uncovers a secret that could destroy the City of Angels—and the American ideal itself.

Josh Weiss is an author from South Jersey. Raised in a proud Jewish home, he was instilled with an appreciation for his cultural heritage from a very young age. Today, Josh is utterly fascinated with the convergence of Judaism and popular culture in film, television, comics, literature, and other media. After college, he became a freelance entertainment journalist, writing stories for SYFY WIRE, The Hollywood Reporter, Forbes, and Marvel Entertainment. He currently resides in Philadelphia with his incredible wife, Leora; their adorable Cavapoo, Archie; as well as an extensive collection of graphic T-shirts, movie posters, vinyl records, and a few books, of course.

“Tight, well-paced, inventive, and inspirational, Weiss’ splendid debut is classic noir tinged with the slightest pinch of science fiction; readers can thrill to the bits of dissonant history they recognize, even as they revel in the mayhem and suspense that permeate the text.”—Mystery Scene Magazine

“America’s close call with the political paranoia of McCarthyism makes for one whopper of an alt-history backdrop for Beat the Devils... the novel is a tasty slice of noir fiction.”—SyFy Wire

“Clever and innovative: a page-turner.”—Mystery Tribune

"Beat The Devils by Josh Weiss blew me away. A brilliant alternate history, a riveting fifties-era noir crime caper, and an edge of your seat thriller—all wrapped into one! This is a stunning novel that takes readers for a mind-bending ride with elements that seem shockingly relevant in our current day and age."—Mark Greaney #1 NYT Bestselling Author of The Gray Man

"A thought-provoking dive into an alternative USA even weirder and wilder than our own. Weiss and his world-weary protagonist LAPD detective Morris Baker put the reader eerily at home in a twisted world of prejudice, privilege and murder, but amid the dark deeds there's hope and humour and heart. A fun, intelligent and satisfying read."—Ian R MacLeod, author of Wake Up and Dream

“Josh Weiss has announced himself as a bold new voice in the world of pulp noir fiction. One part Raymond Chandler, one part Philip Roth, a dash of Ben Hecht — and you’re about halfway there.”—J.D. Lifshitz, co-founder of BoulderLight Pictures and producer of The Vigil

“Thrillers involving the 1950s and an L.A. police detective are close to being a dime-a-dozen, but not so with Josh Weiss’s superb Beat the Devils. It takes place in 1958 Los Angeles, but very different from our own history, beginning with the shocking twist that the President of the United States is former Wisconsin Senator Joe McCarthy. Instead of the relative peace and prosperity of the Eisenhower years, we’re in the nightmare that is the McCarthy years, filled with Communist hunts among government agencies, businesses, and the media, as well as a secret police arresting and sometimes executing those suspected of disloyalty. Into this richly plotted and detailed novel is Detective Morris Baker, a Holocaust survivor who must navigate the dangerous times of this place, where Jews are second-class citizens, subject to pogroms and violence. A murder involving a prominent journalist and a famed film director sets him on a course of suspicion, betrayal, and double-crosses against a background of deep paranoia and permanent war. A remarkable achievement.”—Brendan DuBois, award-winning and New York Times bestselling author of Resurrection Day and Amerikan Eagle

"Alternate histories are difficult to craft, but the world of Beat the Devils is built with hair-raising perfection. Weiss holds a warped mirror to the American Dream — revealing dark undercurrents thread through with troubling, yet true, history. I couldn't turn the pages fast enough!"—Ryan Graudin, award-winning author of Wolf by Wolf

“Much more than a thriller… Riveting — and scary.”—AudioFile

“A must-read for fans of alternate-history fiction.”—Booklist