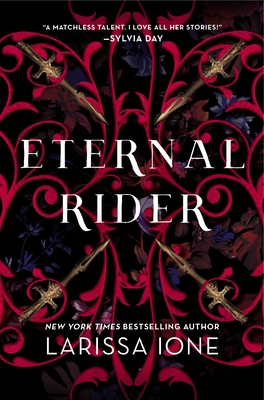 This is book number 1 in the Four Horsemen series.

A dark, sexy romance from New York Times bestselling author Larissa Ione for readers of Katee Robert, Laura Thalassa, and Scarlett St. Claire: she's his only hope to stop the Apocalypse—but is he willing to pay the price?

His name is Ares, and the fate of mankind rests on his powerful shoulders. If he falls to the forces of evil, the world falls, too. As one of the Four Horsemen of the Apocalypse, he is far stronger than any mortal, but even he cannot fight his destiny forever. Not when his own brother plots against him.

Yet there is one last hope. Gifted in a way other humans can’t—or won’t—understand, Cara Thornhart is the key to both his safety and his doom. But involving Cara will prove treacherous, even beyond the maddening, dangerous desire that seizes them the moment they meet.

New York Times bestselling author and Air Force veteran Larissa Ione traded in a career in meteorology to pursue her passion of writing. She has since published dozens of books. She now spends her days in pajamas with her computer, strong coffee, and supernatural worlds. She believes in celebrating everything, and would never be caught without a bottle of Champagne chilling in the fridge . . . just in case. She currently lives in Wisconsin with her retired U.S. Coast Guard husband, her son, a rescue cat named Vegas, and her very own hellhounds, a King Shepherd named Hexe and a Belgian Malinois named Duvel.

“A matchless talent. I love all her stories!”—Sylvia Day