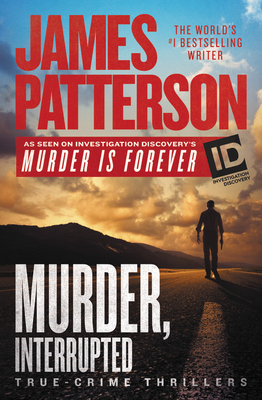 This is book number 1 in the ID True Crime series.

As seen on Discovery's Murder is Forever TV series: In these two true crime thrillers, a reluctant hitman and a cheating husband fight for their lives . . . and a single mother exacts her revenge.
In Murder, Interrupted (with Alex Abramovich), rich, cheating financier Frank Howard wants his wife dead, and he's willing to pay Billie Earl Johnson whatever it takes: $750,000, to be exact. When his bullet misses the mark, Billie Earl and Frank will turn on each other in a fight for their lives . . .
Mother of All Murders (with Christopher Charles) is the story of local celebrity Dee Dee Blancharde. Television reports praise her as a single mother who tirelessly cares for her wheelchair-bound, chronically ill daughter. But when the teenaged Gypsy Rose realizes she isn't actually sick and Dee Dee has lied all these years, Gypsy Rose exacts her revenge . . .

James Patterson holds the Guinness World Record for the most #1 New York Times bestsellers. His books have sold more than 355 million copies worldwide. He has donated more than one million books to students and soldiers and has over four hundred Teacher Education Scholarships at twenty-four colleges and universities. He has also donated millions to independent bookstores and school libraries.

"Every once in a while a writer comes along and fundamentally changes the way people read. He or she is so bright, innovative, so industrious that what they envision and create becomes the measure by which all others are judged. In 1993 one such writer - James Patterson - began to do just that. Now...with his mission still unfolding, James Patterson is the gold standard by which all others are judged."
—Steve Berry, New York Times bestselling author of the Cotton Malone series

"Behind all the noise and numbers, we shouldn't forget that no one gets this big without amazing natural storytelling talent - which is what James Patterson has, in spades."
—Lee Child, #1 New York Times bestselling author of the Jack Reacher series