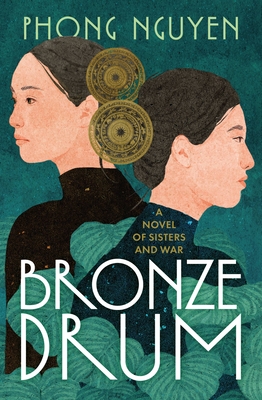 A “gripping historical adventure” of ancient Vietnam based on the true story of two warrior sisters who raised an army of women to overthrow the Han Chinese and rule as kings over a united people, for readers of Circe and The Night Tiger (Booklist).

Gather around, children of Chu Dien, and be brave.
For even to listen to the story of the Trung Sisters is,
in these troubled times, a dangerous act.

In 40 CE, in the Au Lac region of ancient Vietnam, two daughters of a Vietnamese Lord fill their days training, studying, and trying to stay true to Vietnamese traditions. While Trung Trac is disciplined and wise, always excelling in her duty, Trung Nhi is fierce and free spirited, more concerned with spending time in the gardens and with lovers.

But these sister's lives—and the lives of their people—are shadowed by the oppressive rule of the Han Chinese. They are forced to adopt Confucian teachings, secure marriages, and pay ever‑increasing taxes. As the peoples' frustration boils over, the country comes ever closer to the edge of war.

When Trung Trac and Trung Nhi's father is executed, their world comes crashing down around them. With no men to save them against the Han's encroaching regime, they must rise and unite the women of Vietnam into an army. Solidifying their status as champions of women and Vietnam, they usher in a period of freedom and independence for their people.

Vivid, lyrical, and filled with adventure, The Bronze Drum is a true story of standing up for one's people, culture, and country that has been passed down through generations of Vietnamese families through oral tradition. Phong Nguyen's breathtaking novel takes these real women out of legends and celebrates their loves, losses, and resilience in this inspirational story of women's strength and power even in the face of the greatest obstacles.

Phong Nguyen is the author of three novels: Bronze Drum (Grand Central Publishing, 2021), Roundabout: An Improvisational Fiction (Moon City Press, 2020), and The Adventures of Joe Harper (Outpost19, 2016, winner of the Prairie Heritage Book Award); and two short fiction collections: Pages from the Textbook of Alternate History (Mastodon Publishing, 2019) and Memory Sickness and Other Stories (Elixir Press, 2011). He is the Miller Family Endowed Chair in Literature and Writing at the University of Missouri, where he teaches fiction-writing.

“When Beyoncé asked, ‘Who run the world?’ was she thinking about the legendary Trung sisters?  The sisters have long been revered as national icons in Vietnam, and this fictionalized account of their rise to military greatness . . . reminds us that the power of women is nothing new.”—Kirkus Reviews

"Bronze Drum lured me in. It's a richly spun, deftly written tale of bravery, legend, and resistance--a compelling read."—Amina Gautier, author of At-Risk, Now We Will Be Happy, and The Loss of All Lost Things

"Riveting and brilliantly-crafted, Bronze Drum brings to life the story of The Trung Sisters—two fearless revolutionaries who led an army of Viet women in defeating the Han Chinese some 2000 years ago. Though their hard-fought independence was short-lived and often mythologized, Phong Nguyen crystalizes the sisters' lasting legacy in this epic retelling. A novel that evokes ancestral memory to witness and excavate that which must never be forgotten."—Natalia Sylvester, author of Everyone Knows You Go Home

“The story of the Trung sisters spans the tricky midrange between fact and myth, and Phong Nguyen’s ingenious retelling succeeds both as transportive adventure and as something more ambitious, recalling the work of fabulists like Italo Calvino and Angela Carter. The Bronze Drum is dreamlike and absorbing, epic and humane—a vivid evocation of histories that pass invisibly, whispered in ears across centuries, shifting with the times, finally bursting back into the light.”

"’Girl Power’ may have originated with the Trung sisters who fought for Vietnamese independence in 40 CE. Phong Nguyen enlivens this historical moment in BRONZE DRUM, a sweeping and imaginative account of their efforts to form an army of women to fight for and preserve their freedom. This fast-paced novel features palace intrigue, sex, deception, scholarship, bravery, love, honor, magic and power. Nguyen has the rare ability to render events that happened long ago in a way that fells contemporary and even timely. I'm in awe of his storytelling powers and was captivated from the first page to the last.”

—Christina Clancy, author of THE SECOND HOME and THE SHOULDER SEASON

"As groundbreaking as it is gripping, Phong Nguyen's BRONZE DRUM is filled with impeccably researched, vivid storytelling that blends history and myth in spellbinding ways. A masterful first novel--and an important one."

—Liam Callanan, author of THE CLOUD ATLAS and PARIS BY THE BOOK

“Phong Nguyen’s novel Bronze Drum is part epic history, part romantic drama, and all mastery. The novel recounts the Vietnamese people’s astonishing 40 CE rebellion against their Han occupiers, led by the legendary Trung sisters and their female army. If you’re like me, you’ll devour this joyous, defiant novel while cheering for the Trungs and wishing their magnificent, feminist army could lead a rebellion here, today.”

"Through lush prose and sharp imagery, Phong Nguyen introduces readers to the complete story of the Trung Sisters. Bronze Drum is a remarkable novel of these two women's fierceness and heartbreak, their rebellion forming a foundation of Vietnamese history, freedom and independence that Nguyen brings vividly to life on the page. This book is essential reading." —Anne Valente, author of The Desert Sky Before Us and Our Hearts Will Burn Us Down

“Nguyen brings the near-mythical figures of the Trung sisters to full-blooded life in this sweeping historical narrative... Gripping historical adventure.”—Booklist