El Mesquite: A Story of the Early Spanish Settlements Between the Nueces and the Rio Grande (Rio Grande/Río Bravo: Borderlands Culture and Traditions #4) (Paperback) 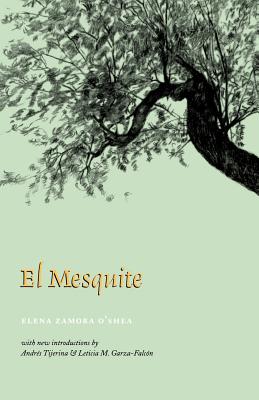 The open country of Texas between the Nueces River and the Rio Grande was sparsely settled through the nineteenth century, and most of the settlers who did live there had Hispanic names that until recently were rarely admitted into the pages of Texas history. In 1935, however, a descendant of one of the old Spanish land-grant families in the region—a woman, no less—found an ingenious way to publish the history of her region at a time when neither Tejanos nor women had much voice. She told the story from the perspective of an ancient mesquite tree, under whose branches much South Texas history had passed. Her tale became an invaluable source of folk history but has long been out of print. Now, with important new introductions by Leticia M. Garza-Falcón and Andrés Tijerina, the history witnessed by El Mesquite can again inform readers of the way of life that first shaped Texas. Through the voice of the gnarled old tree, Elena Zamora O'Shea tells South Texas political and ethnographic history, filled with details of daily life such as songs, local plants and folk medicines, foods and recipes, peone/patron relations, and the Tejano ranch vocabulary. The work is an important example of the historical-folkloristic literary genre used by Mexican American writers of the period. Using the literary device of the tree's narration, O'Shea raises issues of culture, discrimination, and prejudice she could not have addressed in her own voice in that day and explicitly states the Mexican American ideology of 1930s Texas. The result is a literary and historic work of lasting value, which clearly articulates the Tejano claim to legitimacy in Texas history.

ELENA ZAMORA O'SHEA (1880–1951) was born at Rancho La Noria Cardenena near Peñitas, Hidalgo County, Texas. A long-time schoolteacher, whose posts included one on the famous King Ranch, she wrote this book to help Tejano children know and claim their proud heritage.

“. . . the mesquite narratively guides us through a considerable amount of Texas history . . . engaging, lively at moments, serious at others and well-written.”--José E. Limón
— José E. Limón