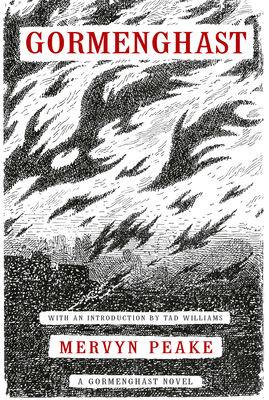 By Mervyn Peake, Quentin Crisp (Afterword by)
$16.95
NOT ON OUR SHELVES- available for order, usually ships in 1-5 days

This is book number 2 in the Gormenghast Trilogy (Paperback) series.

A gothic labyrinth of roofs and turrets, cloisters and corridors, stairwells and dungeons, it is also the cobwebbed kingdom of Byzantine government and age-old rituals, a world primed to implode beneath the weight of centuries of intrigue, treachery, and death. Steerpike, who began his climb across the roofs when Titus was born, is now ascending the spiral staircase to the heart of the castle, and in his wake lie imprisonment, manipulation, and murder.Gormenghast is the second volume in Mervyn Peake's widely acclaimed trilogy, but it is much more than a sequel to Titus Groan—it is an enrichment and deepening of that book. At this very moment, a new generation of fantasy fans is growing to love this masterpiece that ranks as one of the twentieth century's most remarkable feats of imaginative writing.

Mervyn Peake (1911-1968) was a playwright, painter, poet, illustrator, short story writer, and designer of theatrical costumes, as well as a novelist. Among his many books are the celebrated Gormenghast novels, Titus Groan, Gormenghast, and Titus Alone, and the posthumously published Titus Awakes, the lost book of Gormenghast finished by Peake's wife Maeve Gilmore after his death. The Gormenghast novels, as well as Peake's other writings Mr. Pye and Peake's Progress, are all available from The Overlook Press.