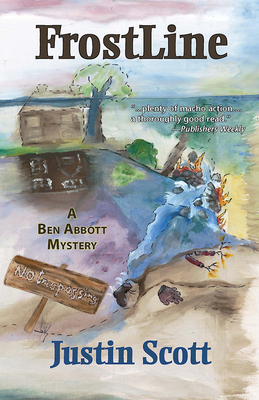 HardScape and StoneDust, the first Ben Abbott novels, established Ben as one of the most engaging and canny investigators to have appeared in a long time. Britain's Literary Review terms the Abbotts Smooth, sardonic, impeccably argued, immaculately written while author Lawrence Block says: Frostline is the best book in a series that started strong and keeps getting better.
When Newbury's newest resident, ex-diplomat Harry King, the close confidant of Kissinger and reputed to have been heavily involved in the Vietnam War, summons real estate agent Ben Abbott to his new McMansion, Ben dreams of big dollar signs. The commission from selling the Fox Trot estate would be huge. But King doesn't want Ben's selling expertise, he wants him to act as a mediator between him and his troublesome neighbour, surly Vietnam vet Ronnie Butler. A strip of Butler's land cuts straight into King's estate like a knife, acting as a red flag for two neighbors who are as ornery and quarrelsome as a pair of rival bulls. In fact, the testoserone is flowing heavier than the waters in the stream King is damming up for a picturesque lake.
Before Ben can mediate, an explosion rocks a lavish party on the Fox Trot lawn. The blast blows up the dam--and Butler's ex-con son, Dickie, along with it. Butler, an army-trained sapper, is arrested for setting the dynamite. Ben, whose childhood friend Dickie had tried his patience and loyalty many times before, refuses to accept Butler's guilt. Besides, too many things don't add up. Could it be the work of terrorists? Of one of the many groups holding a grudge against King? Or just someone with his own axe to grind? With the Feds on the scene, caught in state and locallaw enforcement jockeying, Ben negotiates an unpopular course through the usual minefield of his various loyalties to friends, family and lovers, of whom there are plenty....