Gumshoe on the Loose (The Mortimer Angel Series) (Paperback) 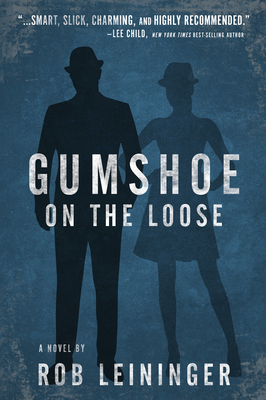 This is book number 3 in the The Mortimer Angel Series series.

“Rob Leininger captures the voice and heart of the classic PI mystery and manages to make it completely original at the same time—Mortimer Angel is my new favorite Private Eye.”—John Lescroart, New York Times best-selling author

IRS agent-turned-PI Mortimer Angel is relaxing in a hole-in-the-wall bar in a Reno casino when an attractive young girl hires him to find out who left her a cryptic message demanding a million dollars. At the girl’s house, Mort finds the body of missing rapper Jonnie Xenon—Jo-X to his legions of fans—hanging from the rafters with two bullet holes in him. Mort is shocked when he learns the identity of the girl’s father—and even more shocked when the father hires him to investigate the murder. Mort, being Mort, accumulates a few felonies as he follows the clues to Las Vegas. And along the way, he picks up an alluring young assistant who changes his life—in every conceivable way.

Award-winning and USA Today best-selling author Rob Leininger grew up in California before joining the Navy. He served aboard heavy cruisers during the Vietnam War and also at McMurdo Station in Antarctica. He received a mechanical engineering degree from the University of Nevada, Reno, and worked on Trident missiles for Hercules, and “black” defense projects for Northrop Corp. Gumshoe on the Loose is the third novel in the best-selling Mortimer Angel Gumshoe series. Before deciding to write full-time, Leininger taught high school math in Reno, Nevada. He is a member of Tau Beta Pi—engineering honor society and of Pi Mu Epsilon—National Mathematics Society. He now lives in northwest Montana.

“Over the top? Yes. Bawdy and rollicking? Oh, yes. Politically correct? Would you really expect that of a hard-boiled PI? Of course not… [Gumshoe on the Loose is] a fun read, and a good one.”—Killer Nashville

"So delightful are [Mort and Lucy's] scenes together that we’re sorry the two have to get to work. A high-speed, easy-reading narrative."—Booklist

Praise for the Gumshoe series:

“Gumshoe for Two is smart, sexy, and un-put-downable. Another in a long line of winners from Rob Leininger. Mortimer Angel is my new favorite private eye.”—John Lescroart, New York Times best-selling author

“[Gumshoe is a]...complex, seductive thriller... There’s no violence and very little gore for most of the novel, but after a long and complicated buildup, the climax arrives with screaming intensity.”—Publishers Weekly (Starred Review)

“...a combination Philip Marlowe and Mike Hammer with a generous dash of Maxwell Smart....Once this novel is picked up, the reader will be reluctant to put it down….Bring on the next adventure, Mr. Leininger. We’ll be waiting!”—NY Journal of Books