It's News to Me (Clare Carlson Mystery #5) (Hardcover) 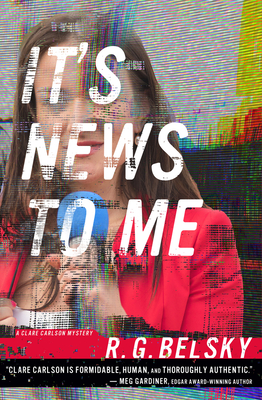 This is book number 5 in the Clare Carlson Mystery series.

Dashed dreams: she wanted to run for president one day, now she’s dead at 20

After days of intense media coverage, a suspect is caught: a troubled Afghanistan war veteran with a history of violent and unstable behavior. The suspect’s mother, however, comes to Clare with new evidence that might prove her son’s innocence.

As Clare digs deeper into the puzzling case, she learns new information: Riley had complained about being stalked in the days before her murder, she was romantically involved with two different men—the son of a top police official and the son of a prominent underworld boss—and she had posted her picture on an escort service’s website offering paid dates with wealthy men.

Soon, Clare becomes convinced that Riley Hunt’s death is more than just a simple murder case—and that more lives, including her own, are now in danger until she uncovers the true story.

It’s News to Me is perfect for fans of J. D. Robb and Karin Slaughter

While all of the novels in the Clare Carlson Mystery series stand on their own and can be read in any order, the publication sequence is:

R. G. Belsky is an author of crime fiction and a journalist in New York City. He has a degree in journalism from Ohio University and has had an illustrious career in both print and television news. He is the former Vice President at NBC Local Digital News, Managing Editor of the NY Daily News, News Editor of Star Magazine, and Metropolitan Editor of the New York Post. Most recently, he was a Managing Editor of NBC News. Belsky’s crime novels reflect his extensive media background in newspapers, magazines, and TV/digital news. It’s News to Me is the fifth novel in his Clare Carlson series, following Yesterday’s News, Below the Fold, The Last Scoop, and Beyond the Headlines. Belsky resides in New York City.

"When a popular college student named Riley Hunt is murdered in Manhattan, it’s a big story for TV newswoman Clare Carlson. Quickly, a troubled Afghanistan war veteran is identified as the main suspect. Then the suspect’s mother approaches Claire with information that could prove her son is not the killer." —New York Post

“[It’s News to Me is] witty, clever and engaging. Clare Carlson’s irreverent comments and dogged reporter’s instincts make for a propulsive ride as she races from the chaos of a newsroom’s inner sanctum to the dangers of a murder victim’s deepest secrets. Once you start, you won’t put it down.” —Lisa Gardner, #1 New York Times best-selling author

“In today's world of fake news and alternate facts, R. G. Belsky reminds us why we need reporters like Clare Carlson more than ever before. She is what we want all our journalists to be—honest, objective, and relentless in her pursuit of the truth.” —Lee Goldberg, New York Times best-selling author

“Belsky’s Yesterday’s News elicits all parents’ deepest fear—the disappearance of a child. But this intelligent, gripping novel is about so much more: ambition, secrets, and, most shocking of all, truth. Read it.” —Reed Farrel Coleman, New York Times best-selling author

“What a terrific book! A complex and compelling nonstop cat-and-mouse chase—and you're never quite sure which one's the mouse. Even the savviest of readers will be gasping in awe at Belsky's impressive story-telling skills.” —Hank Phillippi Ryan, Agatha, Anthony and Mary Higgins Clark Award-winning author

“Belsky's behind-the-headlines thriller Yesterday’s News is about truth, lies—and how much of each we're willing to live with.” —Lori Rader-Day, Mary Higgins Clark Award-winning author

“Below the Fold is a terrific mystery, written with a veteran journalist's eye. The pacing and plotting are everything you want, but it's R. G. Belsky's insider knowledge that adds a wonderful layer to this story of media and murder.”—Michael Koryta, New York Times best-selling author

“The Last Scoop is another surefire success for author R. G. Belsky as well as for Oceanview Publishing which has been putting out one top-notch page-turner after another.” —New York Journal of Books

“Belsky’s not just funny; he has a pitch-perfect ear for dialogue, including writing snappy New York repartee not seen since Susan Isaacson.” —BookTrib