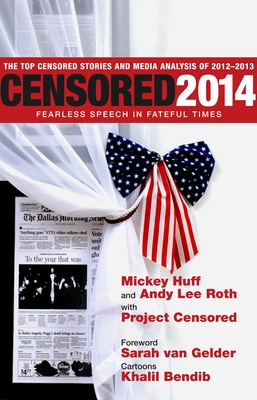 Truthout’s Progressive Pick of the Week

Every year since 1976, Project Censored, our nation's oldest news-monitoring group--a university-wide project at Sonoma State University founded by Carl Jensen, directed for many years by Peter Phillips, and now under the leadership of Mickey Huff--has produced a Top-25 list of underreported news stories and a book, Censored, dedicated to the stories that ought to be top features on the nightly news, but that are missing because of media bias and self-censorship.

Seven Stories Press has been publishing this yearbook since 1994, featuring the top stories listed democratically in order of importance according to an international panel of judges. Beyond the Top-25 stories, additional chapters delve further into timely media topics: The Censored News and Media Analysis section provides annual updates on Junk Food News and News Abuse, Censored Deja Vu, signs of hope in the alternative and news media, and the state of media bias and alternative coveragearound the world. In the Truth Emergency section, scholars and journalists take a critical look at the US/NATO military-industrial-media empire. And in the Project Censored International section, the meaning of media democracy worldwide is explored in close association with Project Censored affiliates in universities and at media organizations all over the world.

A perennial favorite of booksellers, teachers, and readers everywhere, Censored is one of the strongest lifesigns of our current collective desire to get the news we citizens need--despite what Big Media tells us.

PROJECT CENSORED, founded in 1976 by Carl Jensen at Sonoma State University, has as its principal objective the advocacy for and protection of First Amendment rights, including freedom of information. In 2008, Project Censored received the PEN/Oakland Literary Censorship Award. Most recently, Project Censored received the 2014 Pillar Award in Journalism and New Media, given annually to persons of conscience, conviction, and achievement who stand up for what’s right and what’s true in the face of corporate and political intimidation. For more information, visit www.projectcensored.org.

"This book is evident of Project Censored's profoundly important work in educating readers on current events and the skills needed to be a critical thinker."–Publishers Weekly

"In another home run for Project Censored, Censored 2013 shows how the American public  has been bamboozled, snookered, and dumbed down by the corporate media. It is chock-full of ‘ah-ah’ moments where we understand just how we’ve been fleeced by banksters, stripped of our civil liberties, and blindly led down a path of never-ending war."—Medea Benjamin, cofounder of Global Exchange and CODEPINK, and author of Drone Warfare

"For the smart and courageous news manager, this annual report is a virtual road map for the coming year's news schedule."—The Village Voice