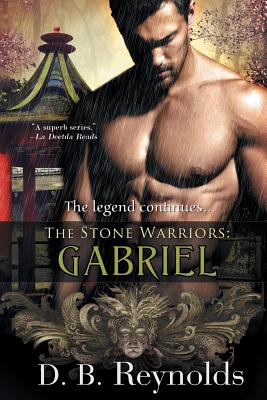 It was a time when gods walked the earth, when armies fought not for bits of land, but for the very existence of humanity. On such a battlefield, five formidable warriors stood against an evil greater than any the earth had ever seen. But evil is not an honorable foe. Betrayed by someone they trusted, the warriors were cursed, one by one, tossed into the maelstrom of time, imprisoned in stone, their freedom resting on nearly impossible conditions. Until. . . .

Gabriel Halldor . . . one of the fiercest warriors the world has ever seen, but his tremendous skill can't save him from a sorcerer's curse. Trapped in stone and left lying in darkness for thousands of years, he is, at long last, brought into the sunlight of a Japanese garden, where a young girl comes to sit at his feet and read him stories as she grows to womanhood.

Hana Himura . . . beloved granddaughter of a Japanese mob boss, raised to the life of a warrior. When death comes for her grandfather, he sends her to the one guardian courageous enough to protect her from a sorcerer who will stop at nothing to have her.

Raphael . . . the most powerful vampire lord on earth, and the only man who can save Gabriel and Hana from an enemy who would enslave them both.

Running from the certain death that awaits them in Japan, Hana and Gabriel flee to Malibu and the vampire lord her grandfather called friend. Raphael is magic and power combined, and Gabriel and Hana will need both if they're going to survive long enough to defeat their enemy and light the flame of desire that's been simmering between them for years.

D. B. Reynolds is the RT and Epic award-winning author of the Vampires in America series of paranormal romance, and an Emmy-nominated television sound editor. D. B. currently lives in a flammable canyon near the Malibu coast, and when she's not writing her own books, she can usually be found reading someone else's. You can visit D. B. at her website.