This Place That Place (Paperback) 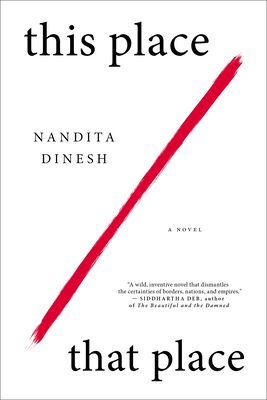 An impassioned and inventive debut novel about two people earnestly searching for a way to preserve their friendship across seemingly insurmountable political divides...

IN A NAMELESS COUNTRY under military occupation, two friends prepare to attend a wedding. The young man is from the occupied region (“This Place”), the woman is from the occupying nation-state (“That Place”). The complicated relationship between these two protagonists with unusual professions—he is a Protest Designer and she is a De-programmer—is tested when, on the eve of the wedding, the occupying power, That Place, formally annexes This Place and declares a curfew.

Suddenly finding themselves confined to the same isolated space, the young woman and man try to kill time but inevitably wind up talking about the ways in which the war between their homelands pervades the unexplored and undeniable attraction between them. Will their relationship become another casualty of war?

This Place | That Place is an evocative debut that functions as a bold allegory for militarized occupations anywhere. As much a visual read as it is a literary one, this brilliant literary debut provides new ways to think about the intersections between the personal and the political; between occupier and occupied; between the kinds of bonds that endure, and those that have no choice but to fracture.

Nandita Dinesh holds a PhD in Drama from the University of Cape Town in South Africa and an MA in Performance Studies from the Tisch School of the Arts at New York University. Focused on the role that theatre and writing can play during and after violent conflict, Nandita has conducted community-based theatre projects in Kashmir, India, Mexico, Costa Rica, Guatemala, Rwanda, Uganda, Kenya, and Zimbabwe. She has written multiple books about her work and in 2017 she was awarded the Elliott Hayes Award for Outstanding Achievement in Dramaturgy by Literary Managers and Dramaturgs of the Americas. This is her first novel.

"The novel’s tense dialogue serves as a brilliant foil for the uncertainty, waiting and vulnerability of life ... boldly inventive ... reminiscent of Margaret Atwood’s 'The Handmaid’s Tale' ... " -- The San Francisco Chronicle

"Original and inventive, this is a novel that speaks to our times." -- Ms. Magazine

"Dinesh uses her wealth of experience to craft a thought-provoking novel that doesn’t claim to have all the answers. Rather, This Place | That Place invites further exploration and provides a new lens through which to see the world." -- Access Bollywood

“A wild, inventive novel that dismantles the certainties of borders, nations, and empires."—Siddhartha Deb

“Nandita Dinesh’s This Place | That Place is endlessly inventive, deeply human, and profoundly relevant to Ukraine and our neo-fascist present. A work of art with a beating heart, it is an astonishing debut.”—Curtis White, author of Lacking Character and Living in a World That Can’t be Fixed

“An audacious and original work of imagining, set in a world where there is nothing more dangerous than unconventional ideas.” Fatima Bhutto, author of The Runaways and The New Kings of the World