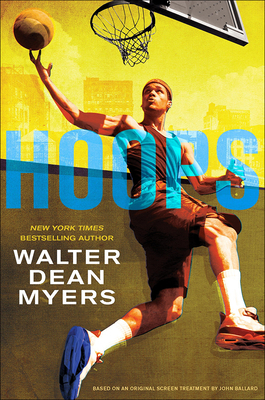 By Walter Dean Myers
$20.80
Email or call for price

"An ALA-YALSA Best Book for Young Adults
"New Bonus Content:
-Q&A with Walter Dean Myers
-Q&A with screenwriter John Ballard
-Teaser chapter from"On a Clear Day
"-Excerpt from"145th Street
"All eyes are on seventeen-year-old Lonnie Jackson while he practices with his team for a city-wide basketball Tournament of Champions. His coach, Cal, knows Lonnie has what it takes to be aprobasketballplayer, but warns him about giving in to the pressure. Cal knows because he, too, once had the chance but sold out.
As thetournament nears, Lonnie learns that some heavy bettors want Cal to keep him on the bench so that the team will lose the championship. As the last seconds of the game tick away, Lonnie and Cal must make a decision. Are they willing to blow the chance of a lifetime?

Walter Dean Myers s fiction and nonfiction books have reached millions of young people. A prolific author of more than one hundred titles, he received every major award in the field of children s literature. He wrote two Newbery Honor Books, elevenCoretta Scott King Award winners, three National Book Award finalists, and the winner of the first Michael L. Printz Award for Excellence in Young Adult Literature. He also received the Margaret A. Edwards Award for lifetime achievement in writing for young adults and was the first recipient of the Coretta Scott King Virginia Hamilton Award for Lifetime Achievement. He was a 2010 United States nominee for the Hans Christian Andersen Award and was nominated for the Astrid Lindgren Award numerous times. From 2012 to 2013, he served as the National Ambassador for Young People s Literature with the platform Readingis not optional. In his most-beloved books, Walter explored the themes of taking responsibility for your life and that everyone always getsa second chance."