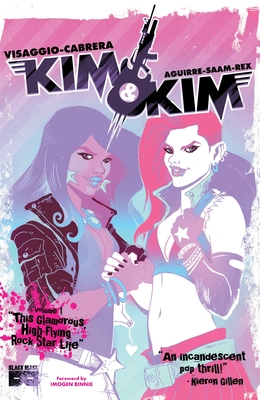 This is book number 1 in the Kim & Kim series.

Kim & Kim are 20something besties out to make a name for themselves in the wild world of interdimensional cowboy law enforcement. Blending the punk exuberance of Tank Girl with the buddy adventure wackiness of Superbad (if Michael Cera was a trans woman and Jonah Hill a queergirl partner in crime), this two-time GLAAD-nominated and Eisner-nominated series focuses on the power and meaning of female friendships as engines of validation. A day-glo action adventure that’s bursting with energy and enthusiasm, Kim & Kim puts queer women and trans women front and center in a bright, happy, punk rock sci fi adventure that is queer as all get-out.

“Kim & Kim is super cute and now I want to read an entire series of the Kims talking about boys for two hundred issues.” –Sophie Campbell (Wet Moon, Jem and The Holograms)

“Get this most excellent book!” –Gail Simone (Batgirl, Secret Six)

Magdalene Visaggio is the Eisner and GLAAD Media Award-nominated writer of Eternity Girl, Morning in America, and Kim & Kim. Growing up in Richmond, Virginia, she moved to NYC after college and abandoned plans to join the clergy to write comic books where people hit each other with guitars. Visaggio came to wider prominence in the comic book industry with the limited series Kim & Kim from Black Mask Studios. The series was nominated for the 2017 Eisner Award for Best Limited Series and GLAAD Media Award for Outstanding Comic Book. The success led to Visaggio signing a three-book deal with Black Mask Studios for her next three projects: Quantum Teens Are Go, Kim & Kim: Love is a Battlefield and Sex Death Revolution. In 2017, she was chosen to take part in DC Comics’ Writer Workshop program following her Eisner nomination for Kim & Kim. Her first book with DC, Eternity Girl, was released in 2018 to critical acclaim/confusion. It’s a weird book. In 2018 her graphic novel The Ojja-Wojja: A Teenage Nightmare was bought by HarperCollins imprint Balzer + Bray. Her first graphic novel with HarperCollins is expected in Fall 2022. A transgender woman, Visaggio transitioned in 2016.

Eva Cabrera is a latina traveler and the comic book artist of Open Earth from Oni Press, Betty & Veronica: Vixens from Archie Comics, and the Eisner-nominated comic KIM & KIM from Black Mask Studio. Vegan and lover of video games and animals. She's worked with Capstone, dedicated to juvenile literature, illustrating the books Romeo and Juliet, Robinson Crusoe and The Three Musketeers. She's done covers for the Adventure Time and Bravest Warriors comics, from the licenses of Cartoon Network, and Lumberjanes for BOOM Studios!. She founded the Boudika Comics studio along with Claudia Aguirre where she published her own graphic novels, presenting them at national and international events such as Comic-Con in San Diego, Alternative Press Expo in San Francisco, and Guadalajara International Book Fair, among others.

"This outer space comic book series with a decidedly queer- and female-centric tale is what our modern culture needs."
— The Advocate

"The comic feels like Tank Girl set in the world of Cowboy Bebop. In short: very, very fun. Oh and BTW, both of the main characters are queer—Kim D is a cisgender bisexual woman and Kim Q is trans and self-identifies as queer, though she’s still sorting o
— Bitch Magazine

“An intriguing comic for all sorts of reasons… one of them is that it’s a comic with LGBTQ content, created while its writer was transitioning.”
— Bleeding Cool

“Kim & Kim isn’t just an incredibly fun comic book... beyond the sci-fi shenanigans and heroic quest the Kims go on, Kim & Kim is an LGBTQ-positive series that features a richly diverse cast of characters (including both of the Kims, one of whom is trans)
— io9