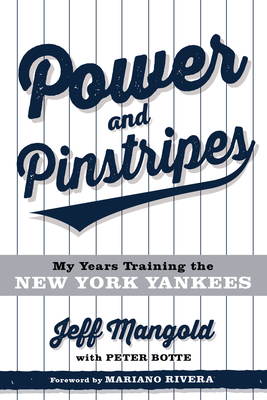 No team in American sports has as storied a history as the New York Yankees, winners of 27 World Series. As the strength and conditioning coach for the Yankees for parts of three decades, Jeff Mangold was firmly embedded  in building the dynasty of the 1990s and 2000s.

In Power and Pinstripes, Mangold shares priceless stories from his 14 seasons behind the scenes in the Bronx.

Mangold had a front-row seat to the daily drama of George Steinbrenner’s revolving door of managers—Yogi Berra, Billy Martin, and Lou Piniella—in the 1980s. Then, when he returned to the Yankees in 1998, he joined a juggernaut of a team and was tasked with maintaining the health of a star-studded roster including the Core Four of Derek Jeter, Jorge Posada, Andy Pettitte, and Mariano Rivera.

Mangold shares personal tales of finding his way with stars like Dave Winfield and Ron Guidry, motivating personalities like David Wells, and facing a thorny challenge that later became a scandal when Roger Clemens and other Yankees arrived at spring training with their own personal strength coaches in tow.

Yankees fans will not want to miss this unique perspective on a the franchise during one of baseball's most exciting and controversial eras.

Jeff Mangold served as the head strength and conditioning coach for the New York Yankees from 1984 to 1988 and from 1998 to 2006. During his tenure, the Bronx Bombers won nine straight American League East titles, appeared in five World Series, and won three World Series championships in 1998, 1999, and 2000. Mangold also worked for the New York Mets from 1993 to 1996 and designed the strength and coaching facilities at both Yankee and Shea Stadiums. He lives in Oakland, New Jersey.

Peter Botte has been writing about New York sports for over 30 years, covering the Yankees, Knicks, and Islanders. He currently writes for the New York Post, and his work has also appeared for the New York Daily News, SportsNet New York, and Newsday, among others. He is the author of The Big 50: New York Yankees.