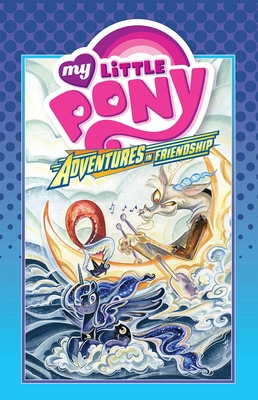 This volume of Adventures in Friendship collects three stories featuring Princess Luna and Discord. First, Discord helps the Cutie Mark Crusaders on their quest for cutie marks, then Princess Luna looks to Pinkie Pie to help find her funny bone, and finally, Luna tries to help Discord get some sleep!

Jeremy Whitley is an American comic book writer and artist, known as the creator of the series Princeless. In 2011 Whitley joined Action Lab Entertainment as their official Director of Marketing and head of PR, where he handles solicitations, reviews, press releases, and interviews. Jeremy has also co-written licensed properties from the publisher including the 2012 digital mini-series "GlobWorld" and the ongoing series "NFL RushZone". In addition to his original creations, he has also been a regular writer for IDW's My Little Pony: Friendship is Magic and My Little Pony: Friends Forever.

Tony Fleecs is the writer and artist of In My Lifetime, an autobiographical comic book. First published in 2006, ‘Lifetime was an immediate critical success, featured twice in Wizard Magazine, in the Comic Buyer’s Guide and on the Ain’t-It-Cool-News. Fleecs has since been a contributor to anthologies including; Postcards: True Stories that Never Happened (nominated for the 2008 Eisner and Harvey awards for best anthology), Boom Studios’ Pulp Tales and C.B. Cebulski’s Wonderlost. He and writer, Josh Fialkov, provided the Li’l FireBreather backup stories for Phil Hester’s second FireBreather series at Image Comics. Last year saw his first work for hire writing work when he scripted the comic book adaptation of the classic John Holmes film, Tell Them Johnny Wadd Is Here, widely regarded as the first comic book based on a porno to not be completely awful. His company Fleecs Design (who’s talent roster includes only himself) has a client list that features Disney, 20th Century Fox, Bongo Comics, Marvel/Rittenhouse, The Milwaukee Brewers, Cincinatti Bengals, Pittsburgh Steelers, Stan Lee’s POW! Entertainment, The Weinstein Company, Monster Garage, Taco John’s, major hospitals, insurance providers and banks. His comics have been published by Random House (Villard), Image Comics, Silent Devil Productions, Boom!, IDW and Terminal Press.

Brenda Hickey is a comic artist and writer from Prince Edward Island, Canada. She's had an unhealthy obsession with the comics art form from a very young age, and can't remember a time when she wasn't drawing. In 2007 she graduated from the Holland College Graphic Design program in her home town of Charlottetown, and had a short stint working in layouts in animation. Now she mainly focuses on comics, and her most well known work is on IDW's My Little Pony: Friendship is Magic series. Other works include her self published mini series Tatian in Halls of the Turnip King, her webcomic series In the Air, comic issues for Bayer Medical, as well as contributions to several comic anthologies.