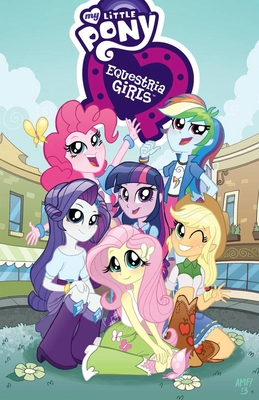 Based on the hit movies, join the girls as they get settled into Canterlot High. Plus, Sunset Shimmer tries to find the true meaning of the holidays as rumors circulate around the school. Collects the 2013 Annual and the 2014 Holiday Special.

Katie Cook is a comic artist and writer that hails from the mitten state (as in Michigan, not that she is in the state of being a mitten). She is the creator of the comic Gronk: A Monster’s Story as well as working on IDW’s smash-hit My Little Pony: Friendship is Magic. She has also done work for Marvel, DC, Disney, LucasFilm, Fraggle Rock, and many other companies. She also wrote some books about mean cats that people seem to like.

Tony Fleecs is the writer and artist of In My Lifetime, an autobiographical comic book. First published in 2006, ‘Lifetime was an immediate critical success, featured twice in Wizard Magazine, in the Comic Buyer’s Guide and on the Ain’t-It-Cool-News. Fleecs has since been a contributor to anthologies including; Postcards: True Stories that Never Happened (nominated for the 2008 Eisner and Harvey awards for best anthology), Boom Studios’ Pulp Tales and C.B. Cebulski’s Wonderlost. He and writer, Josh Fialkov, provided the Li’l FireBreather backup stories for Phil Hester’s second FireBreather series at Image Comics. Last year saw his first work for hire writing work when he scripted the comic book adaptation of the classic John Holmes film, Tell Them Johnny Wadd Is Here, widely regarded as the first comic book based on a porno to not be completely awful. His company Fleecs Design (who’s talent roster includes only himself) has a client list that features Disney, 20th Century Fox, Bongo Comics, Marvel/Rittenhouse, The Milwaukee Brewers, Cincinatti Bengals, Pittsburgh Steelers, Stan Lee’s POW! Entertainment, The Weinstein Company, Monster Garage, Taco John’s, major hospitals, insurance providers and banks. His comics have been published by Random House (Villard), Image Comics, Silent Devil Productions, Boom!, IDW and Terminal Press.