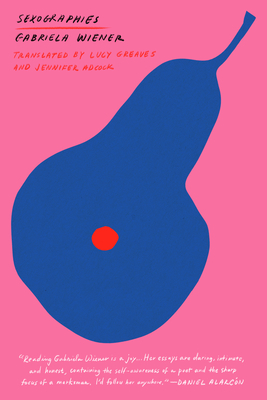 “No other writer in the Spanish-speaking world is as fiercely independent and thoroughly irreverent as Gabriela Wiener. Constantly testing the limits of genre and gender, Wiener’s work … has bravely unveiled truths some may prefer remain concealed about a range of topics, from the daily life of polymorphous desire to the tiring labor of maternity.”

In fierce and sumptuous first-person accounts, renowned Peruvian journalist Gabriela Wiener records infiltrating the most dangerous Peruvian prison, participating in sexual exchanges in swingers clubs, traveling the dark paths of the Bois de Boulogne in Paris in the company of transvestites and prostitutes, undergoing a complicated process of egg donation, and participating in a ritual of ayahuasca ingestion in the Amazon jungle—all while taking us on inward journeys that explore immigration, maternity, fear of death, ugliness, and threesomes. Fortunately, our eagle-eyed voyeur emerges from her narrative forays unscathed and ready to take on the kinks, obsessions, and messiness of our lives. Sexographies is an eye-opening, kamikaze journey across the contours of the human body and mind.

“No other writer in the Spanish-speaking world is as fiercely independent and thoroughly irreverent as Gabriela Wiener. Constantly testing the limits of genre and gender, Wiener´s work as a cronista (which roughly translates, but is by no means a direct synonym, of nonfiction writer) has bravely unveiled truths some may prefer remain concealed about a range of topics, from the daily life of polymorphous desire to the tiring labor of maternity.”
— Cristina Rivera Garza, author of The Iliac Crest

“This collection of essays [opens] on the outskirts of Lima, jumps to a swinger’s party in Barcelona, and next a squirt expert’s apartment. This book can feel psychologically hazardous to read; it pushes you to answer the questions Wiener asks herself: Would I? Could I? Will I?”
— Angela Ledgerwood

“In her native Peru, Gabriela Wiener has a reputation as a gonzo journalist who takes an active role in whatever subject she investigates, which as often as not involves sex, and not the vanilla variety. In this collection, her first translated into English, we meet a notorious polygamous pornographer; go to 6&9, a Barcelona sex club; interview the cruel Lady Monique de Nemours, a world-class dominatrix; visit Vanessa, a member of the European community of Latin American trans sex workers; get a first-hand look at the perils of threesomes; and explore other topics a tad too risqué to even name in a family newspaper. Suffice to say, Wiener’s free-wheeling style is hugely entertaining.”
— Sarah Murdoch

“These are essays of unabashed honesty and uncommon freedom of mind, bravely reported and beautifully composed. I hadn’t known how hungry I’d been for this book, how I’d needed it and wanted other books to be it. Sexographies is an antidote and a revelation, and Gabriela Wiener is a brilliant documenter of sex and life as they really are."
— Kristin Dombek, author of The Selfishness of Others

"Reading Gabriela Wiener is a joy. Over the years, her work has made me cry, laugh, hurt, and most importantly, dream. Her essays are daring, intimate, and honest, containing the self-awareness of a poet and the sharp focus of a marksman. I'd follow her anywhere."
— Daniel Alarcón, author of At Night We Walk in Circles

“One of the most interesting writers of this generation is Gabriela Wiener, a Peruvian journalist best known for her high-spirited explorations of female sexuality.... Wiener is witty and fast-paced; many of her experiences, sexual and otherwise, are hard-won, territories explored and sometimes conquered, despite her neurotic misgivings, with courage and aplomb. Part of her appeal lies in the fact that she sometimes writes about sexual topics that have not been well explored, especially by women, and a sense of incredulity is part of the pleasure of reading her work. ‘Is she really going to do that?’ the reader wonders. ‘Is she really going to write (and so openly) about doing that?’ And then she does, and there’s a slight but perceptible shift in the world because she did.”
— Lisa Fetchko

“With sizzling prose and journalistic attentiveness, Wiener honors the no-clothes rule. She exposes her readers to not only her body, but also to the neuroses, fears, and fantasies that come with it. True to the first-person style of gonzo journalism, each of Wiener’s fifteen transgressive crónicas pull readers into penetrative commentaries on infidelity, abortion, and threesomes, not to mention the ever-elusory ‘Ninja Squirt.’... Sexographies strikes the delicate balance between carnal and curious…. It [expands] the meaning of what pleasure in life can be, sexual or otherwise."
— Madeline Day

“This is a first-person account of the author’s experience infiltrating a dangerous Peruvian prison, participating in swingers clubs, traveling through Paris with prostitutes, and going through a harrowing egg-donation process. Chock-full of robust human experiences, the heroine of this essay collection explores a diverse set of themes like immigration, maternity, fear of death, ugliness, and sexuality with an engaging forthrightness."
— Claire Riggs

“The most striking quality of Sexographies is Gabriela Wiener’s fearlessness—her ability to broach any topic without the slightest flinch, however unfamiliar or achingly personal…. Wiener’s essays do not deal solely in sex, as the title of the collection may suggest, but in the exploration of identity and gender. How are we to make sense of our own bodies and the bodies of others? Why is it that we—with the internet at our fingertips—supposedly know more than ever, yet often experience less and are less open to the experiences of others? Wiener urges us to ask these questions in order to uncover the artificial boundaries that have confined us to our own experiences. With a voice as unapologetic as it is searching, this gonzo journalist delivers her findings on a wide variety of topics, from egg donation to prison tattoos to BDSM. Nothing is off limits to Gabriela Wiener and she spares her readers no detail of her adventures. The result is Sexographies—an addictive and darkly funny collection that surprises at every turn.”
— The Arkansas International

“Reading her, one has the feeling of an unexpected closeness, able to go at the speed of heart rate. Gabriela Wiener doesn’t seem to have any taboos or issues in revealing to us her own sexuality, her own suffering, her curiosity or her morbid fascination, and this sincerity makes her prose admirable, a bravery not so common in our times.”
— Guadalupe Nettel

“Gabriela Wiener writes about her adventures as a fledgling wild detective; her real and imagined illnesses; her numerological obsessions; her sexuality; and her life as a mother, a wife, and a nostalgic and furious Peruvian. In whispers and in laughter—and ranging from uncertainty to denunciation and from full-frontal exhibitionism to coy flirtatiousness—the author gives herself over to writing. The result is this insolent and amusing book: as journalistic as it is lyrical, by turns sad and delirious, and unforgettable throughout."
— Alejandro Zambra, author of Multiple Choice and My Documents