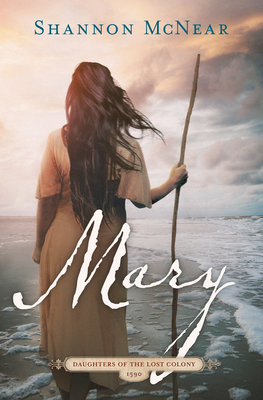 Worlds Collide Along the Shores of the Outer Banks

Immerse yourself in the “what if” questions related to the Lost Colony of Roanoke. What if an English boy and a native girl met in the wilderness? The push-and-pull between two very different worlds begins as one seeks simple friendship and the other struggles to trust. And can it—dare they—allow it to be more?

Sparks fly between Mushaniq, free-spirited daughter of Manteo, and Georgie Howe, whose father was brutally murdered by undiscovered native warriors before they’d been on Roanoac Island a full week. As Georgie struggles to make sense of his life and to accept that not all they call “savage” are guilty of his father’s death, Mushaniq grapples with her own questions about who Manteo has become. As tentative friendship becomes more, forged in the fire of calamity and attack upon their community, both must decide whether the One True God is indeed who He claims to be and whether He is worthy of their trust.

Also of interest:
Elinor by Shannon McNear (Book 1 – Daughters of the Lost Colony)

Transplanted to North Dakota after more than two decades in Charleston, South Carolina, Shannon McNear loves losing herself in local history. She’s a military wife, mom of eight, mother-in-law of three, grammie of two, and a member of ACFW and RWA. Her first novella, Defending Truth in A Pioneer Christmas Collection, was a 2014 RITA® finalist. When she’s not sewing, researching, or leaking story from her fingertips, she enjoys being outdoors, basking in the beauty of the northern prairies. Connect with her at www.shannonmcnear.com, or on Facebook and Goodreads.

In Mary, author Shannon McNear continues the story of the sixteenth-century colony of Roanoke begun in Elinor, weaving factual clues gleaned from thorough research with insightful and suspenseful imaginings of how this community of early European settlers might have become ‘lost’; weaving the cultures and mindsets of two strikingly different people groups; weaving the hearts of a young Native woman, Mushaniq, and a young English man, Georgie, as they navigate the complicated middle ground between their peoples—as shifting as the sands that form the barrier islands of their coastal home—seeking a path firm enough to carry them forward into a shared future. The resulting story is as pleasing as a skillfully woven sweetgrass basket, and hints of more to come. I cannot fail to mention how vividly this setting is brought to life; I can still smell the salt-sea air and hear the gulls and feel the warmth of tide-washed sand.
--Lori Benton, Christy Award-winning author of Burning Sky, Mountain Laurel, and other historical novels


Heartwarming and heartbreaking at the same time, Mary is the next satisfying tale in the Daughters of the Lost Colony series. The wild lands of the New World are a dangerous place to be, for body, heart, and soul. New relationships are forged between the natives and the colonists as they struggle to figure out life together--all while dodging the ever-present threat of attack. A story that you won't soon forget.
--Michelle Griep, Christy Award-winning author

In Mary, the second book of the Lost Colony Series, Shannon McNear focuses on a native maiden and the English youth with whom she falls in love. Again, the reader is quickly immersed in the mysterious, haunting primeval coastlands of North Carolina through evocative descriptions and realistic, relatable characters. The depth of McNear’s research is impressive. But what affected me most was her depiction of what might have been if later European colonists had chosen to work with the indigenous peoples to build communities based on mutual respect and cooperation instead of, as happened in too many cases, taking the land by force, with the consequent stain on American history. McNear doesn’t offer a utopian interpretation of the possible fate of the lost colonists, but portrays honestly common human virtues and flaws, failures and successes in both native and English characters. In Mary we are given a bright vision of what can happen when we see those of other races and cultures as image-bearers of the Creator equally precious in our Savior’s sight, and neither bludgeon them with our faith nor neglect to preach the gospel through word and action so that some may come to a saving knowledge of Christ.
—J. M. Hochstetler, author of The American Patriot Series and coauthor with Bob Hostetler of the Northkill Amish Series


With Mary: Daughters of the Lost Colony, author Shannon McNear blurs the demarcation between history and fiction in such a way that the saga is both fully believable and beautifully written. I loved how the story questions deepen as McNear picks up where her novel Elinor ends, twining the fates of two women from different cultures and beliefs who hold the same needs and yearnings. Mary pulses with drama, romance, and spiritual insight. I highly recommend it to any lover of historical fiction who has ever pondered the mysteries surrounding the Lost Colony of Roanoke.
--Naomi Musch, author of Season of My Enemy (Heroines of WWII), Song for the Hunter (sequel to Mist O’er the Voyageur), and Lumberjacks and Ladies (Not for Love)

Explore the history and lore of Roanoke in Shannon McNear's Mary: Daughters of the Lost Colony Book 2. Young orphan Georgie Howe and Mushaniq, the precocious daughter of Native leader Manteo, force the Indian and English peoples to explore how to mesh two different cultures into one cohesive unit. That joining doesn't come easily. McNear deftly weaves history with fiction to create a compelling tale of times gone by. Don't miss this one!
--Jennifer Uhlarik, award-winning author of Love's Fortress and Sand Creek Serenade

This honest and thought-provoking exploration of a long-standing mystery of early American colonization serves up not only a rich coming-of-age yarn but also not one but two romances, including the resolution of Elinor’s rescue in Book One. The union of two cultures, while fraught with challenges, births many a beautiful moment. Mary immerses readers in a perspective on the Lost Colony as colorful as the North Carolina wilderness and as fresh as the baptism of the native new believers.
– Denise Weimer, author of The Witness Tree and Bent Tree Bride

Shannon McNear once again transports readers to the 1590s in the wilds of a yet unexplored continent. Her new book, Mary, returns to the lost people of Roanoke and explores what might have happened using their known history and expanding into the possibilities. Readers reengage with the characters they grew to love in Elinor and follow their lives as they adapt to the strange and wonderful place they learn to call home. Experience their struggles to survive in both body and spirit alongside these brave men and women of two very different cultures. A captivating read for anyone with a love of history, mystery, and imagination.
—Pegg Thomas, award-winning author of Abigail’s Peace