What Wasn't I Thinking?: A Memoir of Rebellion, Madness, and My Mother (Paperback) 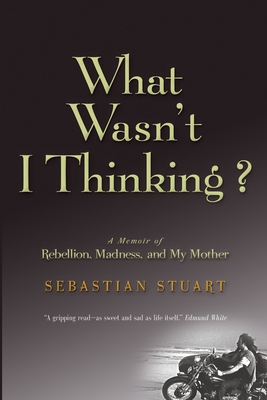 "A madcap and a captivating, deeply moving chronicle of madness-a combination of The Marvelous Mrs. Maisel, Franny and Zooey, and The Bell Jar."-Kevin Sessums, author of Mississippi Sissy

Sebastian Stuart had a heady childhood. His brilliant, acerbic mother was the Entertainment Editor of Life magazine and his father was an Oscar-nominated filmmaker. James Baldwin was a dinner guest and Bette Midler paid a courtesy call. Yet beneath the glittering parties, the family was haunted by unspoken tragedy.

By age fifteen Sebastian was dropping acid and turning tricks for money. He found friendship and solace with his cousin Tina, an aspiring poet and striking beauty who was signed by the Ford modeling agency. When Tina began to exhibit symptoms of schizophrenia, Sebastian was torn between a desire to save her and the fear of losing himself in her madness.

From San Francisco in the '70s to New York in the AIDS-ravaged '80s, Stuart's quest for self-discovery leads to a sad and shocking understanding of his family history and the price of grief denied. And, ultimately, it leads to redemption. By turns hilarious, irreverent and heartbreaking, What Wasn't I Thinking is an unflinching evocation of loss and forgiveness.

"Sebastian Stuart's dazzling memoir held me in its thrall like the best kind of novel. His mastery of suspense and his inherent humanity make for one electrifying read. And, like all good memoirists, he made me reexamine my own life along the way." -Armistead Maupin

"A gripping read-as sad and sweet as life itself." -Edmund White

"Reading this rowdy and seductive memoir is like meeting the most fascinating person at the party and having him all to yourself. With both humor and pathos, Sebastian Stuart whispers all the juiciest gossip in your ear while examining the consequences of privilege and the shockwaves of intergenerational trauma, sparing no one in his sights-especially himself." -Christopher Castellani, author of Leading Men

"What Wasn't I Thinking? is a sexy joyride of a memoir." -Alysia Abbott, author of Fairyland

"Told with both child-like wonder and keen-eyed wisdom, What Wasn't I Thinking? is a captivating glimpse into a reckless, heartbreaking, and ultimately redeeming life. It's also sex-fueled, celebrity-ridden, and binge-worthy. A wild ride." -Stewart Lewis, author of Happily Whatever After

"Sebastian Stuart's compulsively readable new book is that rare thing: a very personal memoir that reflects upon fascinating times and far-flung places with empathy and delight rather than bitterness and blame... It's a tender and funny account of a life well, and generously, lived." -Peter Cameron, author of The City of Your Final Destination