Blood Covenant: The Story of the Mafia Prince Who Publicly Quit the Mob and Lived (Hardcover) 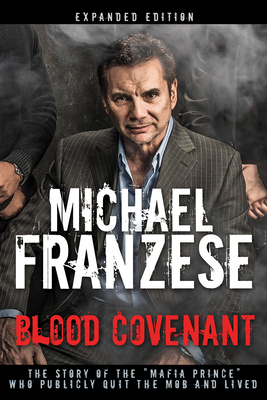 Mob boss Michael Franzese had it all--money, power, prestige. From the time he took a blood oath that bound him body and soul to New York's Colombo crime family, Franzese became a force to be reckoned with in organized crime. Named by Vanity Fair as one of the biggest moneymakers in the mob since Al Capone, he quickly crept into the upper echelon of Mafia authority in this country. By the age of thirty-five, he was the youngest mobster listed on Fortune magazine's survey of the fifty most wealthy and powerful Mafia bosses in America. Then, he did the unthinkable: he quit the mob. Today, Michael is a Christian, finding his own Damascus Road that began with his wife Camille. The story of his conversion is a testament of God's willingness to reach into the heart of any man regardless of their past or the present condition of their lives. In one of the most fascinating books ever written about today's Mafia, Michael reveals the answers to the many mysteries surrounding his incredible life. Find out how and why he did what no one else managed to do--and live. Journey with Michael through a life defined by two blood covenants. The first bound him to the mob. The second set him free.

At the height of his power in the Mafia, Michael Franzese used his wits and charm to keep the likes of John Gotti from moving in on his turf as he became on of the richest mobsters in the country. Now, he is a new man with a new mission in life. Bound to yet another blood covenant, this one as a Christian, Michael travels around the world relating the experiences of his former life to students, pro athletes, business executives, at-risk youth, and anyone who needs inspiration for life's challenges. http: //www.michaelfranzese.com/