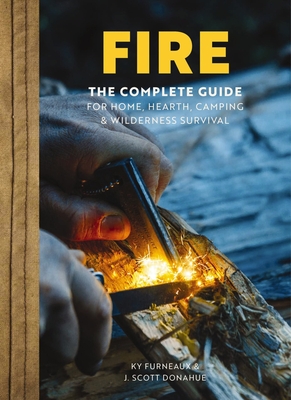 Master the art of building and maintaining a fire, as well as other essential survival skills, with this definitive field guide.

Whether you’re a seasoned outdoor expert or a fire-starting novice, Fire: How to Build It and Everything Else will give you tips and tricks to take your fire making skills to the extreme. Master the art of making fires with advice on how to find the perfect kindling and build, contain, and control your fire—and safely put it out when the time comes—in your home or in the wilderness. Not only will you be able to build a fire safely, but you will know how to extinguish it properly—and what to do in an emergency situation in the event that something does go wrong. Develop skills that won’t fizzle out when you need them most with clear, easy-to-follow directions and helpful illustrations. Find out how to make fires in your home, in the woods, in the snow, or in the desert with a variety of fire-starting methods, and make sure that you always have the right supplies on hand. Explore how to safely and effectively use tools like axes, splitting mauls, hatchets, pocketknives, saws, and more. And—most importantly—learn how to make the best dang s’mores you’ve ever had.

When she was 19 years old, Ky Furneaux’s quiet life in rural South Australia was overturned when a car accident broke her back. Doctors told her she’d never be physically active again. It was the first “you can’t,” Ky decided to ignore, and it changed her path forever.

She fought her way back to full health, and while rock climbing as part of her rehabilitation, discovered a deep love for the wilderness. She became a qualified kayaking, sailing, hiking, and rock-climbing guide sharing this passion with others while pushing the limits of her own survival skills. Ky has kept people safe in some of the most extreme climates in the world from the remote and dangerous West Coast trail in the far reaches of British Columbia to the depths of the Amazon jungle and the barren, deadly high-altitude slopes of Nepal while participating in high-risk activities that have the potential for disaster.

Ky pursued a dream career in stunt performing and traveled to Canada for three years of intense martial arts, stunt driving and weapons training. She worked hard and eventually landed a top job as Sharon Stone’s stunt double in the movie Catwoman.

For the next sixteen years she doubled stars such as Jennifer Garner in Elektra and Jaimie Alexander in Thor and the NBC series Blindspot. A-list names required her help to ensure they remained safe while filming some of the top action sequences of the time. Her professional, calm attitude on set had her working with the likes of Anne Hathaway, Ellen DeGeneres, Hugh Jackman, Arnold Schwarzenegger, and Chris Hemsworth. In 16 years at the top of the stunt game, her many achievements include winning Best Female Stunt Performer in the world in the 2012 Taurus Awards (the Oscars of the stunt industry).

Despite the red-carpet glamour, the outdoors was still Ky’s first love. Following the call of the wild, she challenged herself to new extreme survival expeditions, ditching all the gear and heading out with only a knife.

Ky produced and documented an extraordinary hundred-mile hike across the Sierra Nevada Mountain range. She featured in three episodes of Discovery’s Naked and Afraid and was the only female in Season Two of Discovery’s Ed Stafford: First Man Out, braving a twelve-thousand-foot mountain climb and minus 22? temperatures.

Although she’s conquered grueling terrain in over 65 countries, she is passionate about her country’s unique landscape and wildlife, and she shared the beauty of the Aussie bush in her Discovery and 7Mate series Outback Lockdown. She’s a wilderness warrior in the tradition of the late, great Steve Irwin and in her own words a “true survival nerd.”

J. Scott Donahue was a high school freshman in Mr. Hancock's English class when he first read Jon Krakauer's INTO THIN AIR. A decade later, he traveled to Nepal and wrote his Master's thesis composed of essays on travel and conservation. He contributes to Sierra magazine and YellowstonePark.com and finds the source of wonder in climbing the high Sierra. He is also the author of 50 WAYS TO SAVE THE HONEY BEES.