What We Leave Behind (Paperback) 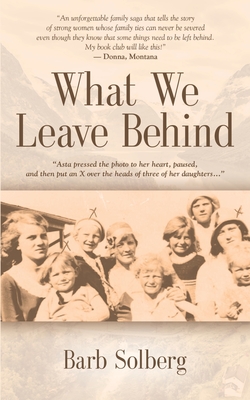 Martin and Asta came to America in 1913 to homestead and create a better life for themselves and a hoped-for family. Nineteen years later during the difficult years of the Great Plains Dust Bowl, they intend to improve the lives of three of their nine children by sending their eighteen-year-old daughter with her two younger sisters to Norway to live with relatives for two years.

But things do not go according to plan.

The oldest sister falls in love with and marries a young Norwegian man leaving the two younger sisters with no one to take them home. By 1940, when Germany invades Norway, the two younger sisters were living with the family relative who in the meantime married a Quisling, a member of the Norwegian Nazi Party. The two sisters miss the last US evacuee ship out of Petsamo, Finland, and soon German soldiers take one sister to Grini, a concentration camp north of Oslo. Eventually she and her older sister both marry men active in the Norwegian Resistance Movement of WWII.

Will the entire family ever reconnect?