Twisted But True: Book II - Filling in the Cracks (Paperback) 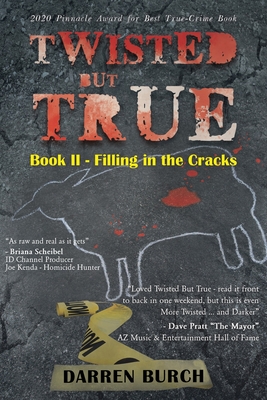 Retired Phoenix Police Sergeant Darren Burch captivates you on another wild police ride-along with outrageously macabre and compelling stories from his thirty-year career as a rookie cop, sex crime detective, and night detective sergeant in the Phoenix Police Department's Homicide Unit in this gut-clinching, horrific, and oftentimes laugh-out-loud funny follow-up to Darren's award-winning true-crime book, Twisted But True. Darren's dark humor reemerges with a vengeance, starting with death and despair, and then to the hilarious as a rookie cop in "That First Squad," to a case of animal sexual depravity in "Choking the Chicken," and a deadly home invasion beyond belief in "That One Case", which was featured on the ID Channel's American Detective TV series. These thirty true-crime stories mirror the time frame of Twisted But True, but this time, Darren goes even deeper and darker by filling in the cracks.