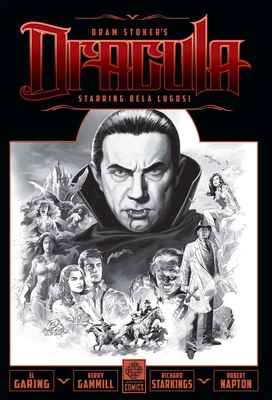 By Bram Stoker, Robert Napton (Adapted by)
$29.99
NOT ON OUR SHELVES- available for order, usually ships in 1-5 days

For the first time ever Bram Stoker’s gothic masterpiece is being united with the definitive screen Dracula, Bela Lugosi, in an all new graphic novel.

15 years after the novel’s publication,Dracula creator and author Bram Stoker passed away. He never got a chance to see how actor Bela Lugosi’s ground-breaking stage and screen portrayal of his character electrified and terrified audiences in the late 20s and early 30s. This performance became iconic and set the standard by which all actors taking on the caped mantle would be judged. With a story so rich in detail and atmosphere, the version of Dracula that Lugosi starred in departed significantly from Stoker’s original gothic tale.

Now, for the first time, Bram Stoker’s classic tale of horror and Bela Lugosi are properly introduced in an all-new graphic novel.With the cooperation of Lugosi LLC, Artist El Garing, Art Director Kerry Gammill, and adaptor Robert Napton take us on a journey into the heart of Stoker’s masterpiece and reminds modern audiences why Bela Lugosi isDracula

Robert Napton is a comic editor and writer current working as SVP of Publishing at Legendary Comics. He has written hundreds of comics and worked for such companies as Image, Marvel, Del Rey/Random House, and Bandai. His comic writing credits include BATTLESTAR GALACTICA, WARLORD OF MARS, DARK WRAITH OF SHANNARA (Based on Terry Brooks' SHANNARA CHRONICLES). As an editor and publisher Robert established Bandai Manga in 2004, the first ever publishing division for Bandai USA, and released dozens of manga titles including, GUNDAM, CODE GEASS, EUREKA SEVEN, HARUHI and others. In recent years Robert joined Legendary Comics and edited such titles as GODZILLA, PACIFIC RIM, and LOST IN SPACE.