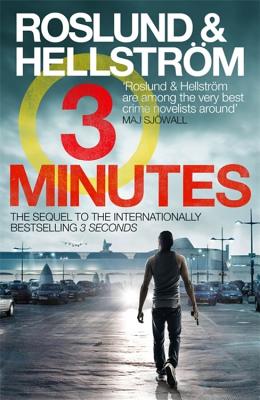 This is book number 6 in the A Ewert Grens Thriller series.

The long-awaited, stand-alone sequel to The New York Times bestselling novel Three Seconds--now a major motion picture starring Joel Kinnaman
Presumed dead by the Stockholm police, master criminal and undercover informant Piet Hoffmann is now on the run from the Swedish authorities, living with his wife and two young sons under an assumed name in Cali, Colombia. Only Hoffmann's former police handler, Erik Wilson, knows where he is--and that he has accepted two dangerous new jobs: one as a high-level enforcer for a Colombian cocaine cartel and one as an infiltrator for the DEA, working to bring the cartel down. The FBI even lends credence to his cover story by adding Hoffmann's alias to the Most Wanted list.

But when the Speaker of the House is kidnapped by the cartel during an official visit to Colombia, everything changes--fast. Hoffmann is party to the highest-profile political kidnapping in years and therefore directly in the firing line in what is quickly dubbed the "Final War on Drugs." Suddenly, the Most Wanted list becomes a kill list and the DEA cuts off all contact on orders from the top, leaving Hoffmann and his family stranded.

Hoffmann must walk a delicate line as he tries to protect his young family and keep up his dual role as a cartel enforcer and a deniable intelligence asset for the US government. It soon becomes clear that his only chance at getting out alive is to rescue the Speaker of the House and bring him back to the States--but to do it he'll need the help of Ewert Grens, the stubborn, dogged Stockholm detective who hasn't forgotten Hoffmann since the explosive showdown in Aspsas prison years ago.

Award-winning journalist Anders Roslund and ex criminal Börge Hellström are Sweden's most acclaimed contemporary fiction duo. Their unique ability to combine inside knowledge of the brutal reality of criminal life with searing social criticism in complex, intelligent plots has put them at the forefront of modern Scandinavian crime writing.

"If Three Minutes is your first exposure to this writing duo, you are in for a ride you will never forget. If you have been following them from the beginning of their collaborations, you have yet another terrific reading experience to look forward to."
—The Bookreporter


"A graphic portrayal of a dirty, ugly slice of life . . . Recommended for anyone seeking to know more about the drug cartels that threaten society."
—New York Journal of Books


"Roslund and Hellstrom accomplish what many thrillers do not do--create an intriguing main character who, despite his actions, is entirely human, and his flaws bleed onto the page."
—Cemetery Dance Magazine


"The descriptions of the drug culture and the amoral character of its various people are gripping, as are the insights into the thinking and actions of police officials and US politicians . . . The sixth and newest in the DCI Ewert Grens series, it is written with power when necessary and delicacy when appropriate; this is a novel to be savored."— Spinetingler Magazine

Praise for Three Seconds
"A nail biter of a book."
—Janet Maslin, The New York Times

"A sprawling and often gripping thriller . . . The gritty details of drug dealing, of prison life, and of the relations between cops and informants are all rendered with convincing authority in Three Seconds."

"Tension? This one's so taut you might snap."—Sunday Sport

"Cleverly crafted and intricately plotted, it's a heart-thumping action thriller that grips the reader from start to finish."—Choice Magazine