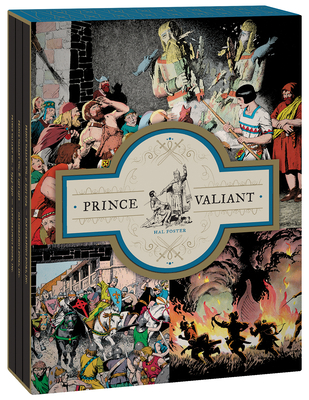 This box set collects the years 1949-1954 of the Arthurian legend-inspired newspaper comic strip.

Hal Foster (1892-1982) created Prince Valiant in 1937. Though remaining involved with the strip until his death in 1982, Foster handed the bulk of the scripting and art chores over to his longtime assistant, John Cullen Murphy, in 1971.

John Cullen Murphy, a six-time recipient of the National Cartoonists Society's "Best Story Strip" for his work on Prince Valiant, continues to draw the strip from his home in Connecticut, while his son, Cullen Murphy, writes the strip in between serving as the Managing Editor for The Atlantic.

In the grand tradition of Arthur Rackham and Howard Pyle... Every panel packs a punch.
— Vanity Fair

It's hard to measure Harold Foster's influence on the
comic-art world. … It's gratifying to know that so much of his work is
available for the public to enjoy and for art

students to study and learn from.
— Angelo Torres