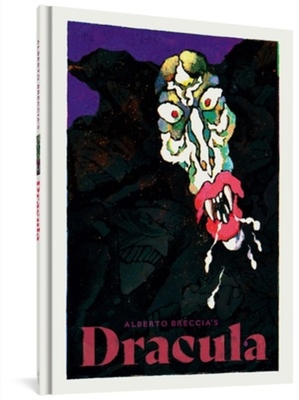 In this wordless, full-color collection of satiric short comics stories, an internationally acclaimed cartoonist chronicles the waning days of the most famous vampire of them all.

Alberto Breccia's Dracula is composed of a series of brutally funny satirical misadventures starring the hapless eponymous antihero. Literally defanged (a humiliating trip to the dentist doesn’t help), the protagonist’s glory days are long behind him and other, more sinister villains (a corrupt government, overtly backed by American imperialism) are sickening and draining the life out of the villagers far more than one creature of the night ever could. This is the first painted, full-color entry in Fantagraphics’ artist-focused Alberto Breccia Library, and the atmospheric palette adds mood and dimension. It also includes a sketchbook showing the artist’s process.


Dracula has no co-author, and so Breccia’s carnivalesque vision is as pure Breccia as it gets. Created during the last of a succession of Argentine military dictatorships (1982–1983), this series of short comics stories ran in Spain’s Comix Internacional periodical in 1984. The moral purpose of Breccia’s expressionistic art style is made explicit; he shows that every ounce of his grotesque, bloated characters’ flesh and blood has been cruelly extracted from the less fortunate.

Alberto Breccia (b. 1919; Montevideo, Uruguay; d. 1993, Buenos Aires, Argentina) is an influential, internationally acclaimed comics artist and cartoonist. His career began in the 1940s, during the golden age of Argentine comics. From 1962–1964, he drew Mort Cinder, written by Héctor Germán Oesterheld, which is considered a masterpiece of the form. He took a break from comics to teach and co-found the interdisciplinary art school IDA (Instituto de directores de Arte) but returned in 1968 to draw graphic biographies of Che Guevara and Eva Perón, and a reboot of Oesterheld’s seminal 1959 graphic novel, The Eternaut. Throughout the 1970s and early 1980s — when Argentina suffered under a series of military dictatorships — and beyond, Breccia drew serialized comics for the European market, working with and adapting writers such as Poe, Lovecraft, Borges, Trillo, Sasturain, and many others. In 2021, he was inducted into the Will Eisner Hall of Fame.

Breccia brings a stunning, nightmarish, and politically charged vision to Dracula’s final days. ... [The artist's] gothic visions skewer the power of myth and make a salient statement about a society that would support fascist rule
— Publishers Weekly (starred review)

The psychedelic form, as well as the blatant splashes of color, make this graphic novel a feast for the eyes, while some of its themes will be recognizable to anyone familiar with Latin America’s socio-political atmosphere.
— New York Journal of Books

When it comes to Breccia, every page is a treasure. ... Almost forty years after its original publication, it remains as powerful as it ever was.
— Solrad