Black and Blue: The Creation Of A Social Advocate (Paperback) 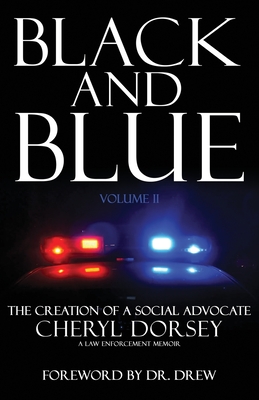 Sgt. Dorsey's experiences form the basis for her second book, The Creation of A Social Advocate. Sgt. Dorsey exposes institutional police abuses and social justice disparities, while introducing strategies to systematically attack those injustices and empower audiences on how to navigate within that system, when necessary, and help change that system, when possible. As a Champion Of Human Rights, Sgt. Dorsey advocates for those who continue to suffer racial injustices, disproportionate and selective enforcement, intolerance at the hands of a police force that swore an oath to protect and serve yet seems to lack empathy and compassion in certain areas of the community.

I am here for you. It may not be you right now- but you might be next." - Ret. LAPD Sgt. Cheryl Dorsey.

Foreword, in part, by Dr. Drew - "We have Cheryl's account and her contributions to law enforcement. That is change. And part of the solution she reminds the reader, is us; our education about law enforcement and how to deal with our encounters with them. Cheryl speaks truth to power in an unbought fashion exposing a system of lies and corruption. There is reason to be optimistic. After all, we have Cheryl Dorsey." - Dr. Drew. ".

An acclaimed author, retired Los Angeles Police Department Sgt. Cheryl Dorsey has written an autobiography, Black and Blue, The Creation Of A Social Advocate Vol II, which provides an unfiltered look into police culture, LAPD's internal disciplinary processes, and techniques to de-escalate and diffuse tensions during police encounters as well as best practices to report police misconduct with a level of credibility that is effective, relevant and irrefutable. Sgt. Dorsey is a highly sought police expert on significant criminal justice issues making national headlines. She has been a frequent commentator on CNN, Fox News, OWN, CNN International, HLNTV, Inside Edition, MSNBC, Democracy Now, The Tom Joyner Morning Show, KPCC and KABC Talk Radio. Sgt. Dorsey has also appeared as a guest police expert on Brazilian TVGlobo, Tavis Smiley, Dr. Drew, Dr. Phil and TD Jakes Shows. She has also been featured on several TV Crime Series such as "It Takes A Killer", "Corrupt Crimes" and "Dead Files". Cheryl Dorsey is a Los Angeles native. In 1978, she began a career in law enforcement where she worked for the State of California, Department of Justice prior to joining the LAPD. www.sgtcheryldorsey.com