Rising Up: Book One in the Tranquility Series (Paperback) 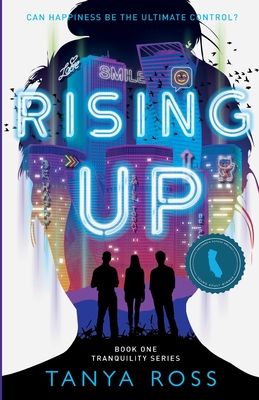 Now with a new cover

"Ross' addition to the dystopian genre leaves teen readers with an understanding that their emotions hold great power, adult readers with an appreciation of metaphor and imagery, and all readers eagerly awaiting the next installment." Deanna Bennett, Librarian, Vista Unified School District

A city under glass. A girl under pressure. When secrets come out, which one will break first?

Sixteen-year-old empath Ember Vinata is devastated by her mother's mysterious death. But in a disease-free domed metropolis where happiness is electronically monitored and enforced, expressing her grief means exile to The Outside.

The only person who can help her is a smoking-hot government agent.

When strange prophetic dreams compel her to investigate, and she discovers the source of the fatal illness, Ember is stunned to discover the perfect city in which she lives is nothing like it seems. And when her new boyfriend appears to be torn between seeking justice and remaining loyal to his oaths, she fears there is no one she can trust...

...Or would her world be rocked by a criminal from The Outside?

Ember's quest for the truth could set her free - or make her a captive pawn.

Rising Up is the thrilling first book in The Tranquility YA dystopian sci-fi series. If you like determined heroines, the power of emotions, and fighting injustice, then you'll love Tanya Ross's raw crusade.