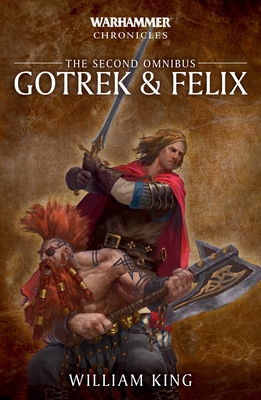 This is book number 2 in the Warhammer Chronicles series.

The second omnibus recounting the tales of the old world's greatest dwarf and human pairing: Gotrek the Slayer and Felix the poet.

Gotrek and Felix: unsung heroes of the Empire, or nothing more than common thieves and murderers? The truth perhaps lies somewhere in between, and depends entirely upon whom you ask...

The Slayer and his poet companioncontinue their adventures, aided by the Kislebvite warrior-princess Ulrika, the wizard Max Schreiber and Gotrek's old comrade Snorri Nosebiter. Returning from their expedition in the distant north, Gotrek and Felix find themselves under attack by and army of monstrous greenskins - and a terrifying dragon. When an immense Chaos horde besieges Praag, the adventurers hasten to defend the beleaguered city - but the masters of the Chaos host have plans for Gotrek. When Ulrika is captured by a dread vampire, the race is on to rescue her before she succumbs to the curse of undeath.

Collectiong Dragonslayer, Beastslayer and Vampireslayer, plus a nmumber of bonus short stories, Gotrek and Felix the Second Omnius is packed with fantasy adventure.

William King is the author of the Tyrion and Teclis saga and the Macharian Crusade trilogy, as well as the much-loved Gotrek & Felix series and the Space Wolf novels. His short stories have appeared in many magazines and compilations, including White Dwarf and Inferno!. Bill was born in Stranraer, Scotland, in 1959 and currently lives in Prague.