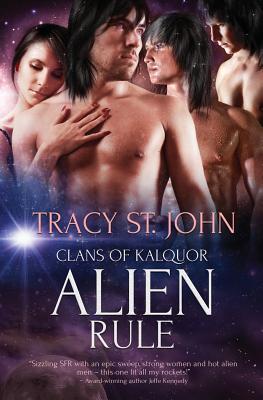 This is book number 2 in the Clans of Kalquor series.

The mighty Kalquorian Empire trembles on the verge of extinction. After watching a virus decimate their female population, Kalquor is desperate to find a way to survive.

Marked for execution, Jessica McInness knows joining the enemy is her only hope for survival. When Kalquor's crown princes arrive to rescue her, she discovers the three alien men aren't quite what she hoped for in lifelong mates. Arrogant and brutish, the royal clan infuriate her--and awaken passions no other men have.

The Kalquorians are determined to seduce the temperamental woman who inflames their lusts. They relentlessly pursue the hesitant Earther, resorting to forceful means to claim her as their mate. But love comes at a high price when the princes' choice of a princess incites a rebellion on Kalquor and endangers Jessica's life.