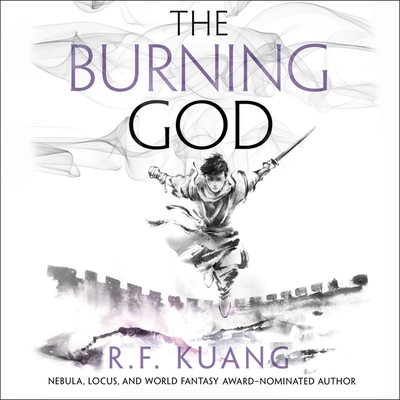 “I knew I was going to be blown away by this book, but I had no idea I was going to be sent into the stratosphere. The Poppy War was already a phenomenal debut, but its successors somehow managed to claw themselves to new heights. The Burning God is no exception. As usual, Kuang holds no punches when it comes to describing the raw horror and consequences of war, drawing her characters to impossibly dark corners where their only escape is through catastrophic decisions. The ending ripped my heart from my chest, but I can’t imagine a more satisfying conclusion for this phenomenal trilogy. A perfect triad of books.”
— Ava Tusek, Second Star to the Right Children's Books, Denver, CO

The exciting end to The Poppy War trilogy, R. F. Kuang's acclaimed, award-winning epic fantasy that combines the history of twentieth-century China with a gripping world of gods and monsters, to devastating, enthralling effect. After saving her nation of Nikan from foreign invaders and battling the evil Empress Su Daji in a brutal civil war, Fang Runin was betrayed by allies and left for dead.

Despite her losses, Rin hasn't given up on those for whom she has sacrificed so much--the people of the southern provinces and especially Tikany, the village that is her home. Returning to her roots, Rin meets difficult challenges--and unexpected opportunities. While her new allies in the Southern Coalition leadership are sly and untrustworthy, Rin quickly realizes that the real power in Nikan lies with the millions of common people who thirst for vengeance and revere her as a goddess of salvation.

Backed by the masses and her Southern Army, Rin will use every weapon to defeat the Dragon Republic, the colonizing Hesperians, and all who threaten the shamanic arts and their practitioners. As her power and influence grows, though, will she be strong enough to resist the Phoenix's intoxicating voice urging her to burn the world and everything in it?