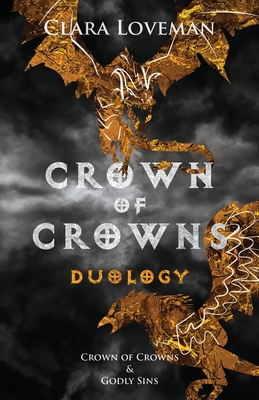 Kaelyn was born into wealth and privilege-but when the otherworldly Crown of Crowns calls her to rule, she must choose between leading with her heart or her head; with the future of the Kingdom at stake.

Crown of Crowns is the first installment of a futuristic new Young Adult saga by Clara Loveman, described as "sweeping, epic, and engrossing" with an "intriguing and twisting plot" that's perfect for fans of The Hunger Games, the Divergent Trilogy, and Neal Shusterman's Arc of a Scythe series.

Godly Sins is the second installment in the Crown of Crowns YA saga, raising the stakes in a galaxy-spanning story.

CROWN OF CROWNS (Book One)

In a kingdom where the ruling and lower classes live and die apart by law, a noblewoman and a commoner make a fatal mistake: they fall in love.

Kaelyn, a young noblewoman, feels smothered under the harsh constraints of the Decens-Lenitas, the legal and moral code that governs the people of the Geniverd Kingdom. When she meets Roki, a handsome young man with knowledge and aspirations beyond his status, Kaelyn realizes she's not the only person trapped. She starts to question everything she thought she knew, including about the Gurnots, a group of rebels set on overthrowing the laws-people who the nobles have labeled as terrorists.

When her parents find out that she's spending more time with a lowborn citizen, they forbid her to meet Roki ever again. He's common. She could be queen.

Kaelyn tries to move on. Her future as a potential leader depends on it. But she can't forget Roki, or the ominous signs his lessons now make clear: the death of an obedient follower of Decens-Lenitas, the unrest that follows ... and the whispers of conspiracy.

With the lives of all free people at stake, Kaelyn must uncover the truth-even if she risks her heart at every turn.

I am Kaelyn, and once I was destined to become the ruler of the Kingdom of Geniverd. Instead, I chose to become a Min and join those fighting against the same oppressive system which raised me-taking a stand against injustice alongside my partner, Roki. Together, we're navigating a conspiracy that spans both the mortal universe and the spirit realm of Shiol-and the stakes in this sinister game of shadows have never been higher.

For soon, a new Crown of Crowns will be elected. As the ruler of the spirit realm, and the highest authority in the galaxy, the Crown of Crowns will have the power to tip the balance in favor of either order or chaos-and the lives of billions could be impacted as a result.

Likewise, in Geniverd, a miraculous new biotechnology has promised to revolutionize society-supposedly granting health, strength, and the potential of immortality to the masses. However, the promise of this genetic engineering has blinded many to the dark secrets and hidden agendas that drove its development in the first place.

I surrendered my mortality so I could take a stand for what's right-but as those I trust betray me, and I find myself manipulated by shadowy figures from my past, doing what's 'right' has become harder and harder to figure out. When those I care about the most become unwitting pawns in this conflict, I'm forced to commit to unthinkable choices-and, as a result, my hands could soon be awash with the blood of billions.